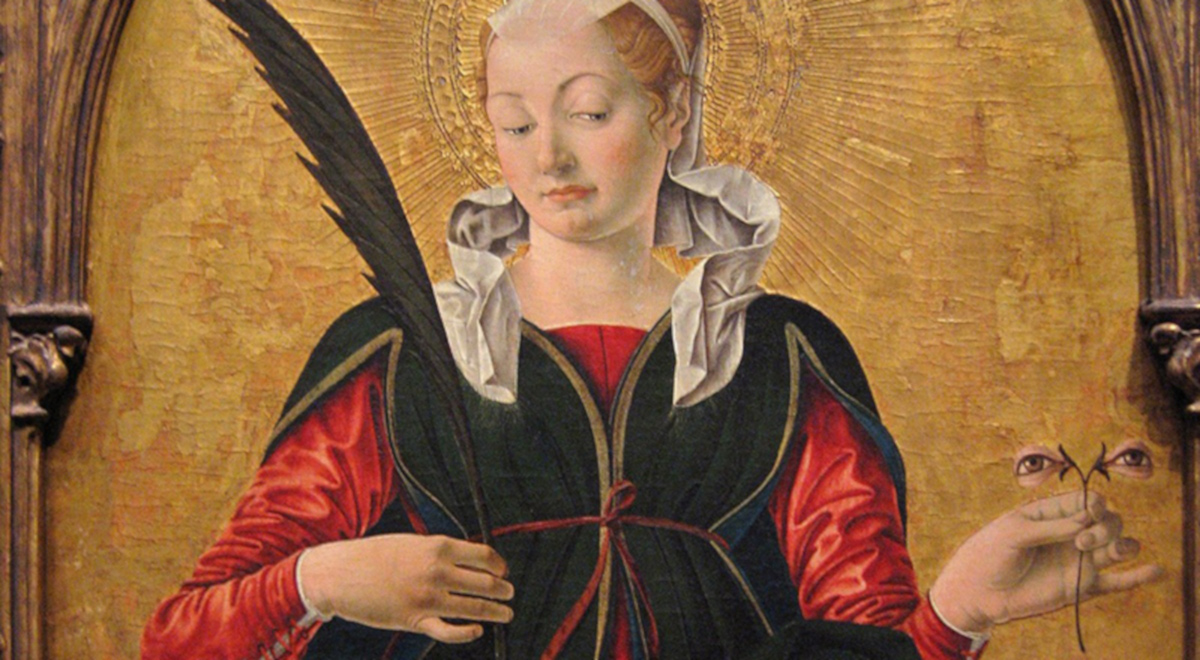 This exhibition, curated by the young curator from Ticino Larissa Foletta, presents itself as goal of a research about the feminist movement in Ticino and Switzerland, through five artists connected in various ways to the cantonal territory. They come not only from contemporary art but also from music and dance. Their different artistic positions contain themes similar to feminist movements: from using one’s own body as a palette and fulcrum of the image, to reconsidering gender relations; wide space is left to the (re)discovery of the self.

The title of the exhibition comes from a coincidence: the opening date coincides with the feast of St. Lucia, a Syracuse saint relevant in the Christian tradition. Martyr – often depicted with a saucer containing her eyes, sometimes together with a palm tree – her image strikes. The particular story of this saint introduces us to both present and future situations connected with the experiences of the artists presented in the exhibition. The common thread that binds the five artists on display is their belonging, sometimes more directly than in other cases, to the Italian-speaking world in Switzerland and to themes raised in the works that deal with and explore the role and condition of women and the relationship between genders. The theme of the exhibition, born from a personal interest of the curator, wants to explore the repercussions and influences of a feminist and feminine movement of women’s liberation during the twentieth century, to go to discover works by contemporary artists active in various artistic fields, from painting to dance, through music. In particular, they are five artists: Katia Bassanini (visual arts), Fiorenza Bassetti (visual arts), Angela Marzullo (visual arts), Carlotta Storelli (dance) and KimBo (music).The exhibition does not intend to impose the definition of a canon of feminist artists on the territory, but the aim is to bring them closer to other artists who develop these themes in their work, or to those interested in them.It was a curatorial choice to assemble these five artists, because in their works are reappearing themes, reinterpreted and shaped, at the center of the feminist movements of the time. Important for the exhibition is to illustrate how claims and questions of that time influence the current feminist discourse. How does this reoccur in local artistic production?

The participating artistsKatia Bassanini, although not defining herself as a feminist, has created several works that can be read in a feminist key, also exhibited here. She died prematurely ten years ago, leaving works that clearly appear among the most relevant in the production of contemporary Ticino artists, because they are fully included in the international artistic debate of her time.During her career, Fiorenza Bassetti has developed themes close to feminism, with continuous research and exploration of her person, also playing on the different senses of the same word. For the exhibition she has developed, among other things, two large unpublished sculptures. Angela Marzullo has explicitly feminist productions and one of the interest elements in her work is the presence of practices explored by Italian feminism, such as self-awareness. Carlotta Storelli, on the other hand, has always worked with the body; through her use she is able to explore stories and perceptions. A work that is perfectly linked to the demands and needs of feminists, both in the ’70s, and contemporary. She will propose to la rada a new performance. KimBo (Kim Bollag), rapper, with her words and texts directly touches on issues sensitive to women. Active also at the political-social level, she is an activist on stage as well as outside. On display, among other things, the video clip created for the women’s strike.

Carlotta Storelli and KimBo will each lead a workshop, where it will be possible to get in touch with own body and express ourself through music (Dance atelier, Carlotta Storelli: December 14th, 2019; Composition atelier, KimBo: provisional date January 11th, 2020). The exhibition will open on December 13th at 6 pm with two performances by Angela Marzullo and Carlotta Storelli, with free admission as the exhibition that will last until Saturday, January 11th, 2020, visible from Thursday to Saturday, from 2 pm to 7 pm.Informations on the workshops and on visits outside hours can be requested at riccardo.lisi@larada.chand at the numbers 076 4391866 and +39 320 4866373.