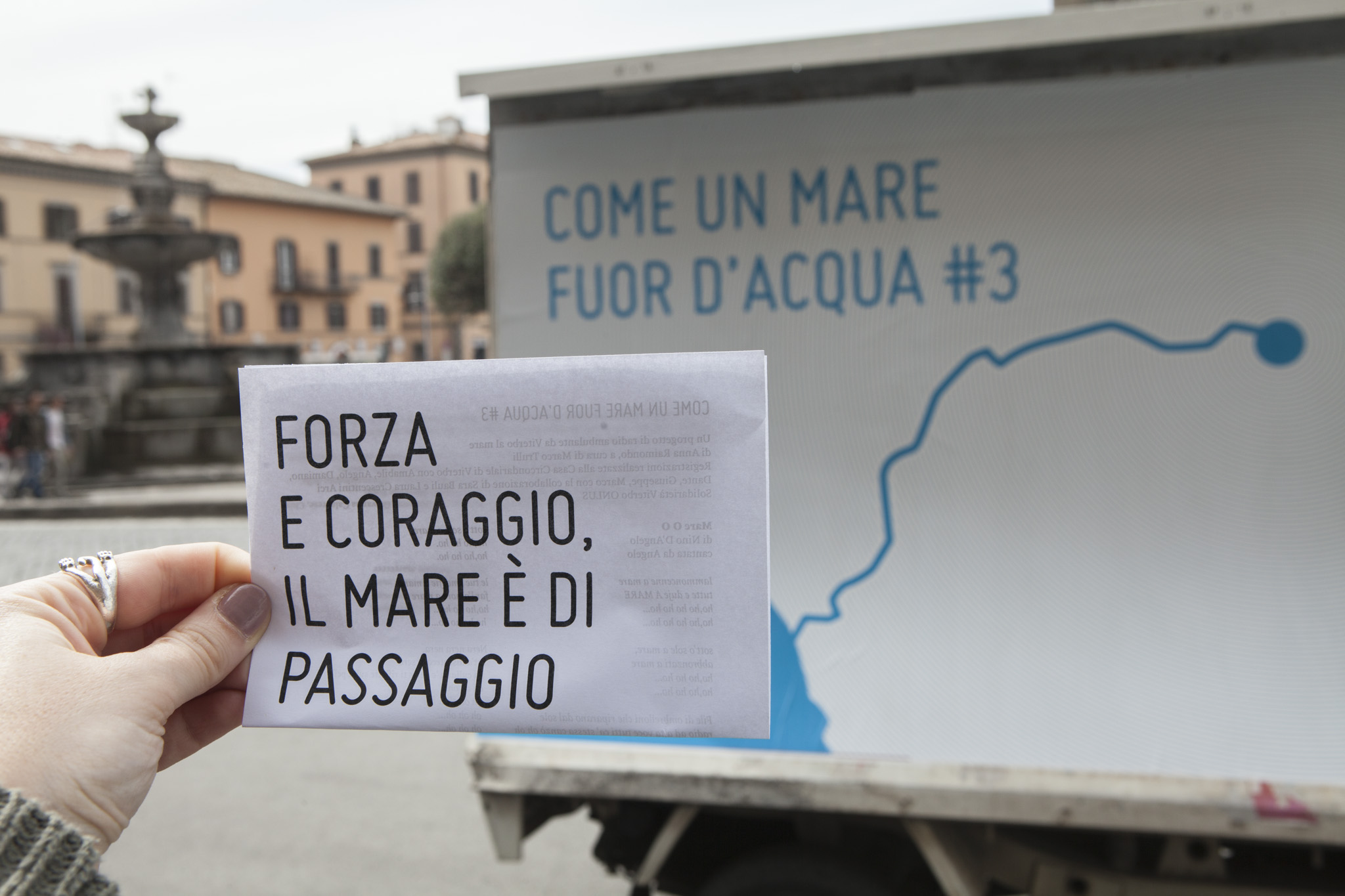 Cantieri d’Arte – La villa ouverte, an art project in the public space in Tuscia since 2005, participates as a winner of the call at Nesxt – Independent art festival with an exhibition and performance by Anna Raimondo curated by Marco Trulli. at Studio bild in Turin.

Cantieri d’Arte is a project by Arci Viterbo that promotes residences on the territory of Tuscia to reflect on the role of art in the landscape and in the public space. For this work both  in the local territory of Tuscia and, in a nomadic way, in the Mediterranean area. For Nesxt, Cantieri d’Arte presents a video and documentary archive of the traveling project. Come un mare fuor d’acqua by Anna Raimondo.

Anna Raimondo’s research focuses in a peculiar way on the creation of incursions in space and in the public sphere, in her continuous attempt to recreate spaces and times of listening in the urban landscape, thus creating way of disorientation and sensory dislocations. Come un mare fuor d’acqua is a project on the paradoxical intent of looking for the sea where it does not exist, starting  from a radical decontextualization that intends to reflect on our bond and our dependence on water and on all its meanings and its forms: from symbolic element to geographical space.

In this sense the sea is meant as a liquid and nomadic, local and universal territory that allows us to imagine a reflection that every time reterritorialises itself in a context of relations, imaginaries and experiences of the sea always different.

The three projects carried out so far by Anna Raimondo have focused on the re-enactment of the sound universe of water, able to mend distances, times and spaces and heal removals, wounds and history collapses, collective or personal. From the sea sounds in Milan, with the evocations of the inhabitants of the San Siro district, to the sound parade that reactivates the memory of the river Senne in Brussels, now covered, to the songs and sound portraits of the Viterbo inmates which transit in public space undisturbed. The sound fluidity as an extreme degree of transition and connection puts the sea back to the world and to the center of the public imaginery. The exhibition will report the different project phases and will activate a sea evocation during NESXT, through a participated construction of a radio broadcast on the sea, which will be broadcast during the festival on Radio Banda Larga.

The radio streaming, scheduled for November 3 from 5.00 pm to 7.00 pm, includes the transmission of sound projects by Raimondo and other artists participating in the project, as well as contributions from the public that can intervene directly by proposing memories, quotes, memories, personal utopias and dystopias linked to the imaginary of the sea. Come un mare fuor d’acqua is a project promoted by Cantieri d’Arte / La ville ouverte for NESXT. The project will be realized in collaboration with NESXT, Studio Bild, Radio Banda Larga, BJCEM, Arci Torino.