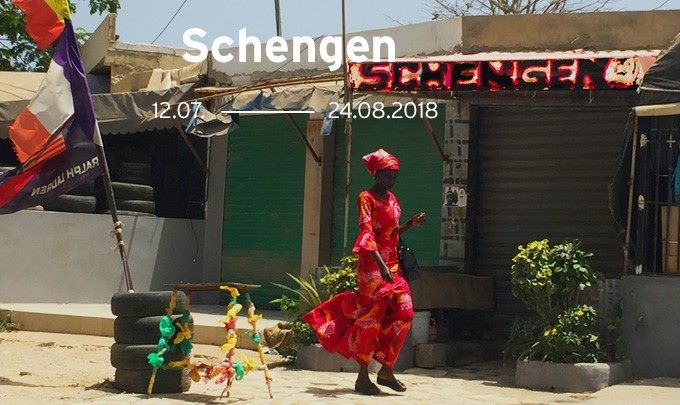 You and your friends are cordially invited to the opening of the exhibition on Thursday,
12 July at 7.30 pm.

Opening hours: Tuesday to Friday 2 to 6 pm and on appointment

Schengen is a three-part exhibition that examines the limitations of socio-cultural and political borders through a totemic memorialization of the migration of bodies and goods. Drawing upon transnational identity and the blue water of the Mediterranean as fluid conceptions of legality and humanity the works problematize the values instilled by international agreements whose fallen fruits too often die on the vine. The destabilizing of the environmental impact of fading traditions, the evasion of prescribed images of nationalistic belonging and the escalation of global crisis set the foundation for ruptured canons and displaced cultural legibility.

On the occasion of the opening of the exhibition, the artists Délio Jasse, Anna Raimondo and Jebila Okongwu will engage in a dialogue with the curators Janine Gaëlle Dieudji and Justin Randolph Thompson of BHMF (Black History Month Florence) and the public, to provide insight to their work and to the broader themes embraced by the exhibition.

Délio Jasse (born in 1980, Luanda, AO) currently lives and work between Lisbon and Milan. In his photographic work, Délio Jasse often interweaves found images with clues from past lives (found passport photos, family albums) to draw links between photography and memory. Jasse is also known for experimenting with analogue photographic printing processes as well as developing his own printing techniques. Recent exhibitions include the group shows African Metropolis at the Museo nazionale delle arti del XXI secolo in Rome (2018) and Recent Histories: New Photography from Africa in the Walther Collection Project Space in New York (2017). Further his work was part of the official selection of the 12th Dakar Biennale (2016),and the 56th Venice Biennale (Angolan Pavilion, 2015). He was one of three finalists in the BES Photo Prize (2014) and won the Iwalewa Art Award in 2015.

Anna Raimondo (born in 1981, Naples, IT) lives in Brussels and works internationally. She completed the MA Sound Arts at the London College of Communication. She has participated in several international exhibitions and festivals. Recent exhibitions include the group show Africa is no Island at MACAAL, Marrakech (2018) and the solo show Mi porti al mare? at MAAC, Brussels (2017). Her radiophonic works have been broadcast internationally. In her curatorial projects she mainly focuses on sound and radio art e.g. in the V&A Museum, London or Le Cube in Rabat. With the artist Younes Baba-Ali she cofounded the radio and sound art platform Saout Radio, based in Morocco. She also initiated Echoes with Amélie Agut about radio art and sonic memories. She has won the Palma Ars Acustica2016 and the price of best soundscape in the frame of the sound art competition PIARS.

Jebila Okongwu (born in London) critiques stereotypes of Africa and African identity and repurposes them as counterstrategies, drawing on African symbolism, spirituality and history. Socio-political concerns are also fundamental to his art. Okongwu often works with banana boxes and considers that their cliched slogans and tropical graphics articulate an exotic provenance, much like the exoticisation of African bodies from an ethnocentric perspective. When these boxes are shipped to the West from Africa, the Caribbean and South America, the old routes of slavery are retraced, accentuating existing patterns of trade, migration and exploitation. A recent motif in Okongwu’s work is the volcano. Prominent institutions that have hosted exhibitions of the artist include the American Academy in Rome (2015), the Museo Nazionale di Capodimonte in Naples (2014), and the MACRO Museum of Contemporary Art, Rome (2013). The artists lives and works in Rome.