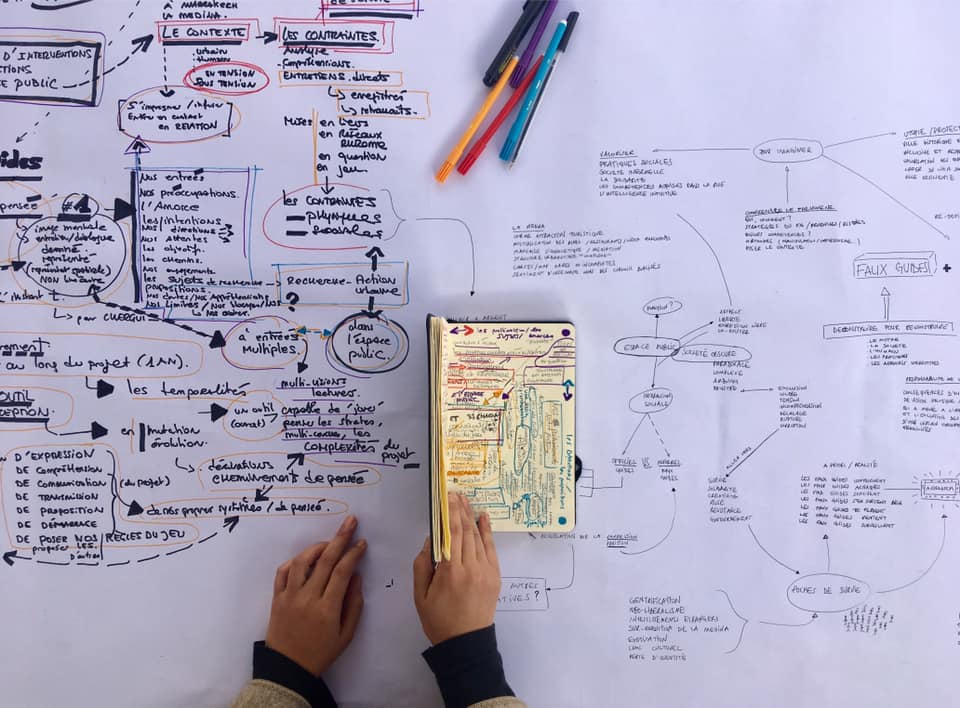 Presentations and debate with Laila Hida, Flore Grassiot, Noureddine Ezarraf, Abdellah M. Hassak, Anna Raimondo and Richard Gregory. Moderated by Francesca Masoero
This panel presents a number of projects and methodologies developed by artists and cultural actors in Morocco and beyond to engage communities and investigate and invest the city and its transformations.

In March 2019, LE 18 presents a new iteration of QANAT, a long-term trans-disciplinary project exploring the politics and poetics of water as a way to critically investigate and invest the space of the commons, a polyphonic platform that draws from, and is inspired by the symbolic and material heritage of Marrakech’s traditional water systems, the one of the khettaras (or qanat). Starting on 15th March with a two-days symposium co-organised with the international project Meet the Neighbours, the programme further articulates in an exhibition and a series of presentations, performative gestures, urban narrations and spontaneous interventions in public space around the 22nd of March, the international day of water, involving artists, researchers, cultural activists and citizens.

ON COMMON[ING] VISIONS __ Meet the Neighbours / QANAT symposium
The symposium On Common[ing] visions investigates diverse methods developed by artists and cultural actors for engaging communities in responsible and affective ways in order to create critical spaces of inclusion, visibility, solidarity and shared visions in fractured societies. Drawing from the diverse practices of QANAT contributors, but also from local initiatives such as ‘Boulevard de la resistance’ run by artist Laila Hida, On Marche festival and Dar Bellarj Foundation, and thanks to the theorico cum methodological contribution of artist Jeanne van Heeswijk, the programme reflects particularly on the poetics and political ecologies of water as an entry to read and engage the city and its fragmented communities, as well as its situated forms of resistance, embodied, for instance by feminin cosmologies, feminist practices, by gestures and the body traversing the public space and the urban scape. By intersecting and integrating its own programming with the one of the festival On Marche and of Dar Bellarj, the symposium finally attempts to be mirror of the links of solidarity and neighborhood that are being sewed since years among cultural institutions engaged with (partly) different communities in and on the city of Marrakech.

This symposium is developed in the context of the transnational programme ‘Meet the Neighbours’, initiated by Quarantine (UK) with Comedie de Bethune (FR), Grand Theatre Groningen (NE), Labyrinth Gallery (PL) and LE 18 (MA). Meet the Neighbours is a programme exploring the transformations of the cities in which the partners situate, and the role that artistic practices and institutions play therein, by inviting artists in residence to engage through diverse poetics and research axes different local communities. Meet the Neighbours is supported by the programme Creative Europe of the European Union.
The programme and the exhibition are funded also thanks to the contributions of Fondation Majorelle, NOMAD, DADA, Wallonie Bruxelles International and Stimulering Fund.