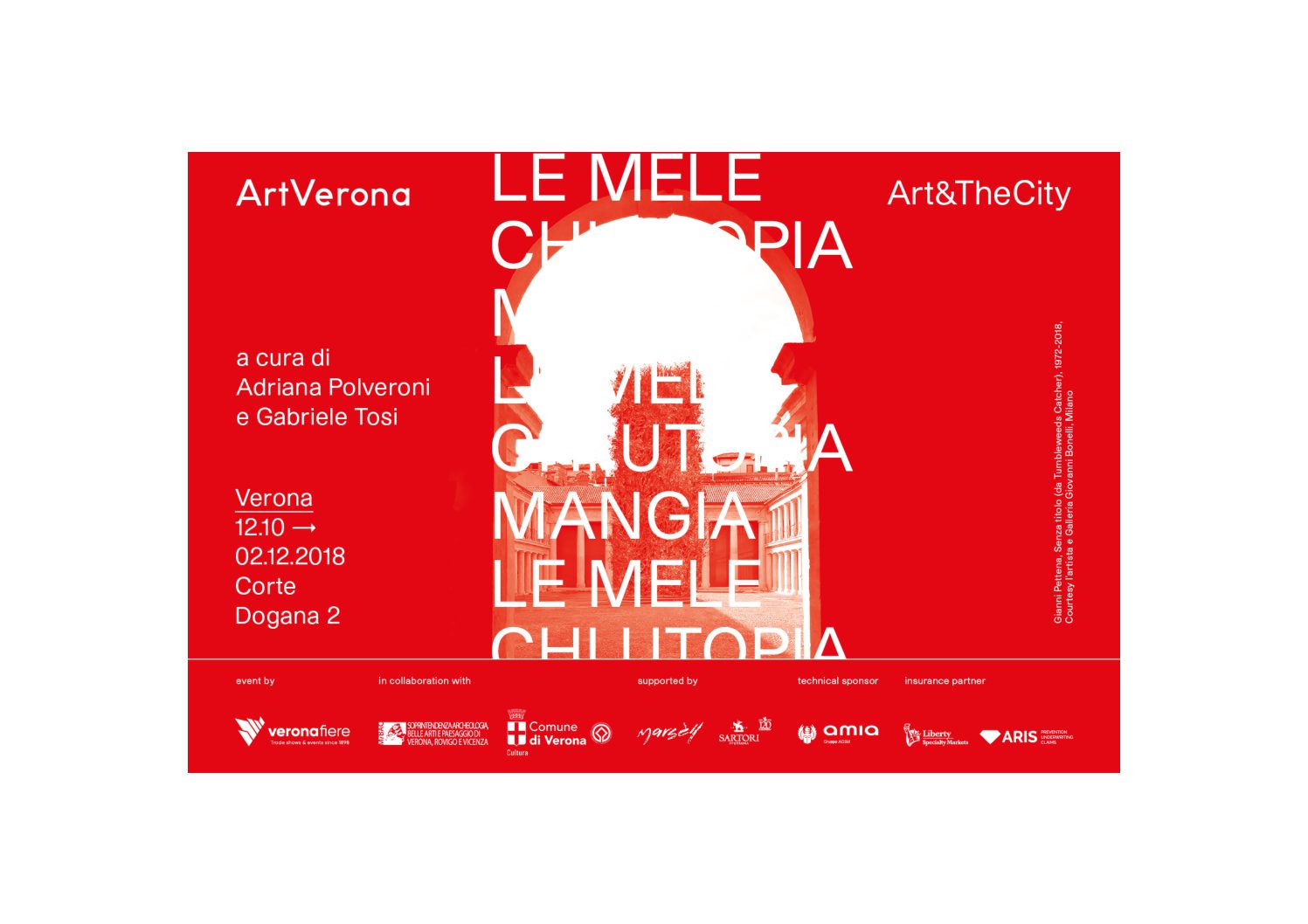 Chi Utopia mangia le mele provides for an eccentric interpretation of the topic of the 2018 edition of ArtVerona, collecting 50 artworks of 40 international artists in the suggestive and unique space of the former Land Customs in Verona. The collective exhibition investigates how the utopian nature of the artistic alteration of reality is able to move towards possible new futures even starting from the study of past ideals and imaginaries.

The pragmatic wish to rethink society combines with the desire of evading, by the rebellion hidden in a gesture, by pure imagination and artistic speculation oases. Each of these words defines the ephemeral and controversial semantic limits in the intrinsic relationship between art and utopia. Directions that the exhibition tries, also through the closeness between artworks, not to limit to a single version, preferring an explosion of possible horizontal dialogues to the linear narration.

And so the exhibited artworks, from the sixties up to the present time, do not build an historical or chronological sequence but they place one next to the other the strong visions that characterize the artworks on display. For the first time, historical artworks are reconstructed, such as Una domenica a Rivara by Maurizio Cattelan or the imposing Tumbleweeds Catcher by Gianni Pettena, but room is also made for more recent proposals in an attempt to describe a new and inclusive cultural heritage for the next future.

Thus, the concreteness resulting from the dialogue among the artworks reinforces the curator’s intention not to present utopia as a chimera but as a way of thinking implying a planning purpose entrusted to us all. In a word, we tried to highlight the ideal impetus of utopia, though addressing the reality of a world that needs, more and more, to shape new life forms. The space of freedom, the relationship of the new communities with their history and with the other-than-self, the possibility to redesign the common daily life through a different vision are the leading pillars of this exhibition, which besides that places the failure of ideals and hopes that supported a few individual actions within a necessarily pluralistic and shared frame.

The relevance of the topic depends on the historical recurrences: 50 years after 1968, a century only from the appearance of Surrealism. But these dates are only the background or possibly the drive to reawaken the liability of art and its public towards the future.

Exhibition conceived by Adriana Polveroni
curated by Adriana Polveroni and Gabriele Tosi designed for the charming rooms of the Palazzo ex Dogana di terra, loaned to the Superintendency for Archaeology, Fine Arts and Landscape of the Provinces of Verona, Rovigo and Vicenza, that is working at the project together with the Municipality of Verona.