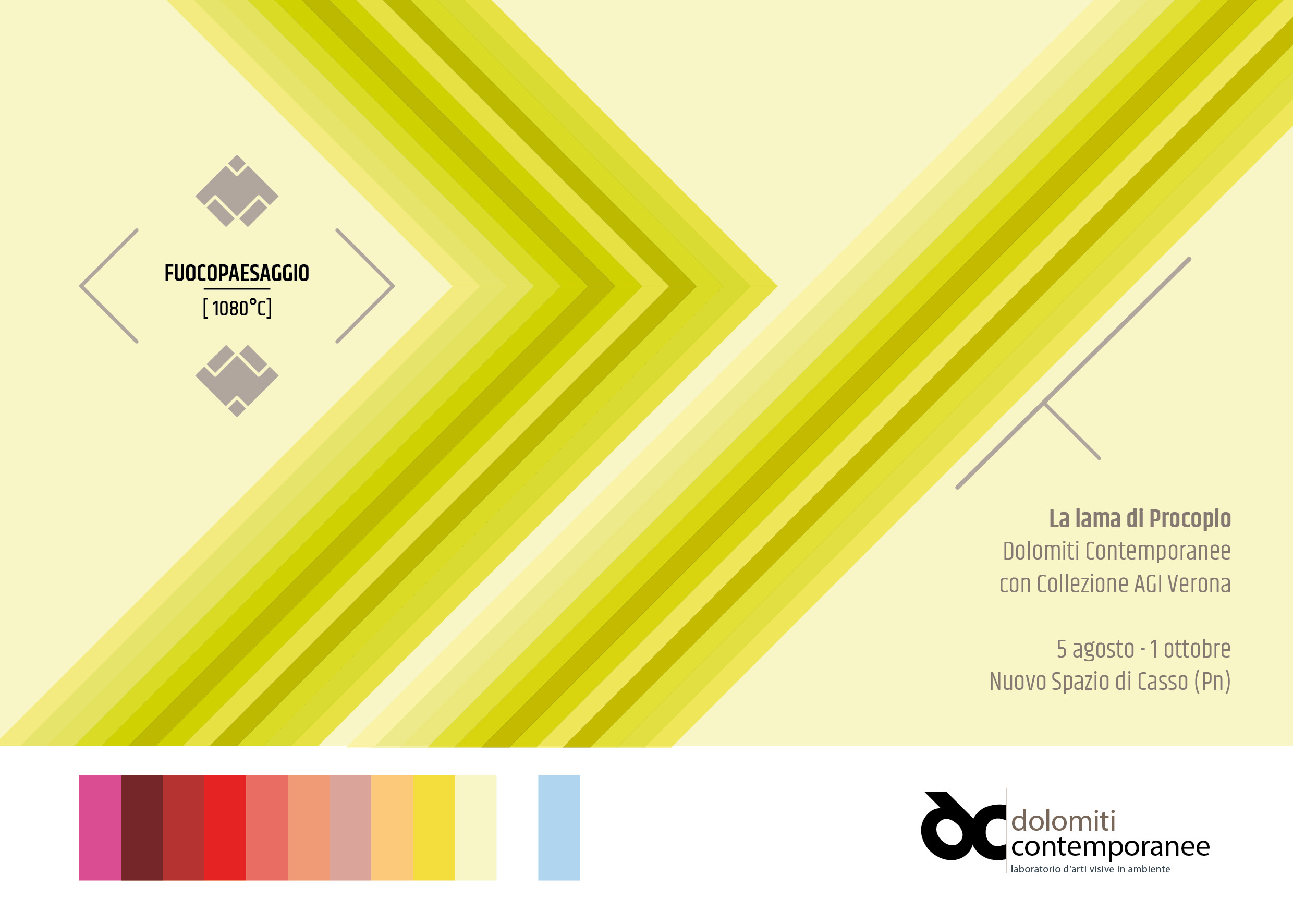 La lama di Procopio is a collective contemporary art exhibit, realized thanks to the collaboration between Dolomiti Contemporanee and the AGI Verona Collection by Anna and Giorgio Fasol, and that hosts the works of twenty-two young international artists.
They come to the eagle’s nest, so to speak, up in Casso, in the heart of the Vajont area, a gallery space found right in front of Mt. Toc and, subsequently, the Vajont Tragedy, meant to oppose its unbearable predatory dominance. This is DC’s vision in Casso, one that is also shared by the collector collaborating in this venture. This is what is needed to be understood when reaching this place with the intent of bringing art into such a critical context, through such an experimental project.
The artworks relate themselves to the space and time of this almost suspended arena, in a mangled contraption of history, and contribute to the regeneration of the human, cultural and historic landscape of the Vajont. A good exhibit isn’t always identical, a sequential copy of itself: the peculiarities and the context’s charge are crucial factors that need to be taken into consideration.
Bringing art up here is a challenge, the relationship between art and the complex nature of the human experience is a marker of the quality and depth of research, that doesn’t exhaust itself in the stasis of the staging.
Or, perhaps, it does. But it isn’t simply the exhibition space the one that moves, in this case: staging, setting up in Casso is staging, always, the meaning of space in a landscape with a great level of criticality.
Art is a responsible cultural practice, it is the voice of the human who delves further, because they exist. If decoration were all we sought, then a contemporary upholsterer would have been enough.
The collaboration with AGI Verona Collection is important in that sense. Thus manifests itself a will to generate a sensitive intellectual movement, shared by the collector and by Dolomiti Contemporanee’s curators, facing the complexities of space and meaning. And that should be the first and foremost mandate of art. The artworks depart from the usual routes, which occasionally become ossified, to instead climb the mountain, and to measure up to its sides, its firmness, its crests, its landslides. To conceive new images and landscapes, to give new life to the land of the humans, those inside their minds and hearts.

work is for beasts, and for trade unionists

making art on the other hand is made for imagining new worlds and spaces, naturally

intellectual faculties and leaps of the soul

do not simply control biological functions (the worst out of all of them is predatory ambition: professionalism)

the chambers of a critical, rapacious critic – it never leads to simple absorption

these mouths open up, and they take in the taste, and the air around it

and in the end naturally, it is, more than anything and as always, about creating a space, and not an exhibit

where in the end is an expression of principle

an exhibit must be a subject of meaning, meaningful: here is the space

in the things human do

there are no categories, but humans

and instead humans, who open their mouths, mouths inside the mind and on their faces, too, naturally

even aprocta animals have an apparatus, whose function is digestive, sure, but before that, we could say, it’s perceptive, in a metaphorical sense

in such a way, nourishing oneself is a higher function: cerebral, spiritual

that ice-cream together, in longarone

a hot day, at the end of this past June
it’s not a hot day at all in borca, from which we depart at dawn, while the woods wake in the cool morning air, the pines bowing down, heavy with dew
and off we go
eight ‘o clock in verona, ten-thirty in casso, the first words already flowing, open mouths and open minds, while we speed up northbound candor abounds, the sincerity of those who must seek, the cabin is full of it, the first few crystals drizzle, and we’re going
ten-thirty we’re entering the vajont area, and still the nestled vessel, the lit chamber between two walled up still-spaces, flares up: every time a branch reaches out, the toc’s bare surface doesn’t separate, but opens instead: a connective void
just an hour here, in this space-landscape taken to the extreme, and unfolded in the vast silence, is enough
just an hour is enough, and thus at midday we’re already full, and descended, but not really resting, always moving instead, in every sense of the word, the cerebral physiologies pressing down on us
sat down at perin’s, in longarone, we taste our ice-creams
around the small round table, enduring and listening and understanding where we are, winking and laughing and listening, tasting carefully this cold meal inside the clipped town
and then another ice-cream
and almost immediately, off we go again, up up up
licking away the sugary traces from our lips, inside the awakened mind: procopio’s blade,
and up some more, fast, in monte ricco, to see the glimmering fort of fuocoapaesaggio
and off again, in the magical woods of borca, where this firework-like nature is sewn like a tapestry

three blocks of meat armed with few alloy drops
but we already found and decided in pieve
found ourselves, and decided what to do
in reality, the hook had already been found before, and decided: around that little round table

making this exhibit in casso together, among humans
kindled by passion
sweet lips pursed
open in a wide smile
over that ice-cream
which therefore becomes not mere idleness
but a method of contraction and distension of the space in the fiduciary relationships between humans who cross the distance, by tasting it, and things, by seeing them, and they seek and touch one another, wanting to expand the meaning of those things: here is art: here is the exhibit
pouring
land owner of space
it’s – accurate – selection of the sweetness of passionate imagination
the whole bowl, the whole cone
a critical eudemonia
and the scientific freedom of going where one must, where the landscape is charged, where one doesn’t need to do another exhibit, but needs to be there for oneself, and for everything around oneself

because there is no research without drive
the activation of a physiological function is liberation of an impulse
surrounded, as we are, and in the dungeons
the dungeons of that art which isn’t idle, but treacherous and closed
which isolates objects in sensory deprivation tanks
from the bottom of which seems impossible to taste humanity
and instead
an ice-cream which becomes a generative engine
a reception and transmission technique for the stimuli of the space
a qualitative reception: a good ice cream
a taste to sweeten the air, a filter to put it against a salty contrast, to change its state and perceptive breath, as if to open the gills of the encephalon and hurling the thalamus for the tasting buds.