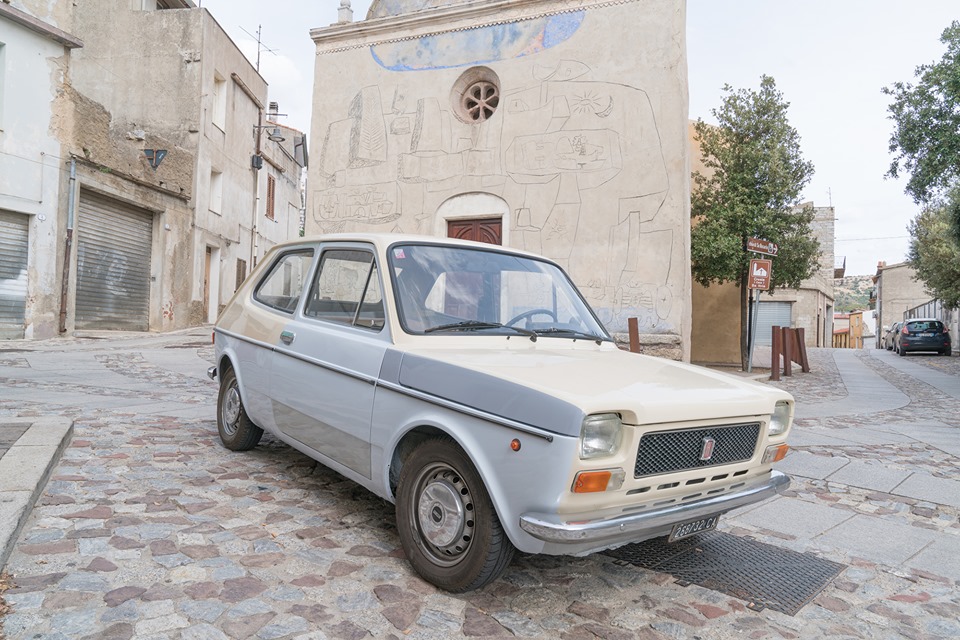 After the performance at the Fog Festival Performing Arts in Milan, Cristian Chironi returns to the place where he grew up, for a new stage of his travelling project (already successfully presented in February 2018 by the Museo Nivola in installation mode).

In Orani Drive we will board the Fiat 127 Special (Chameleon) -The car is customized for each occasion following the color combinations typical of the houses of Le Corbusier where Chironi lives and works. You can get on the 127 not as normal passengers but as a real driver. On this occasion, the artist will sit side by side as a co-pilot, through the streets of Orani, in a journey made of memories and reflections around the themes of travel, community, crossing borders, integration.

A tour of the country that has as its starting point the Church of Our Lady of Itria, decorated on the surface with a graffito by Constantine Nivola, and that develops through the many historical and artistic testimonies of the town and its natural landscape. Among these, the historical centre, where another idea by Nivola is realized, published in 1953 in the magazine Interiors, “The pergola village”: a project that transforms urban space into a domestic environment where collective life can meet. In the “Su Postu” district, there is the house of the painter and engraver Mario Delitala, who in 1936 won the Premio Presidenza Biennale at the Venice Biennale. Leaving the lanes of the heart of the village, you come across the ruins of the Church of Sant’Andrea and its bell tower in Catalan Gothic style of the Old Cemetery. Before returning to the starting point, the performance tour also passes through “Piazza Cumbentu”, where stands the Town Hall, the convent that houses the organ and the wooden choir of the eighteenth century.

A journey made up of journeys and returns; visions out of the window and generational correspondences: from Delitala to Nivola; from Le Corbusier to Salvatore Bertocchi; from Daniele Nivola to Aldo Chironi; from the Masters of the Wall to the tailors Mura and Modolo; the blacksmiths Ziranu; the Brundu; Fadda; Noli; Mureddu; Cavada, in an interweaving of stories, trajectories and values.
Le Corbusier’s slogan ‘a house is a car to live in’ has been reinterpreted in Orani in a new collective guise. A work of art within everyone’s reach, which once again places this small country at the centre of the world.

Orani Drive is a project produced by the Department of Culture of the Municipality of Orani.