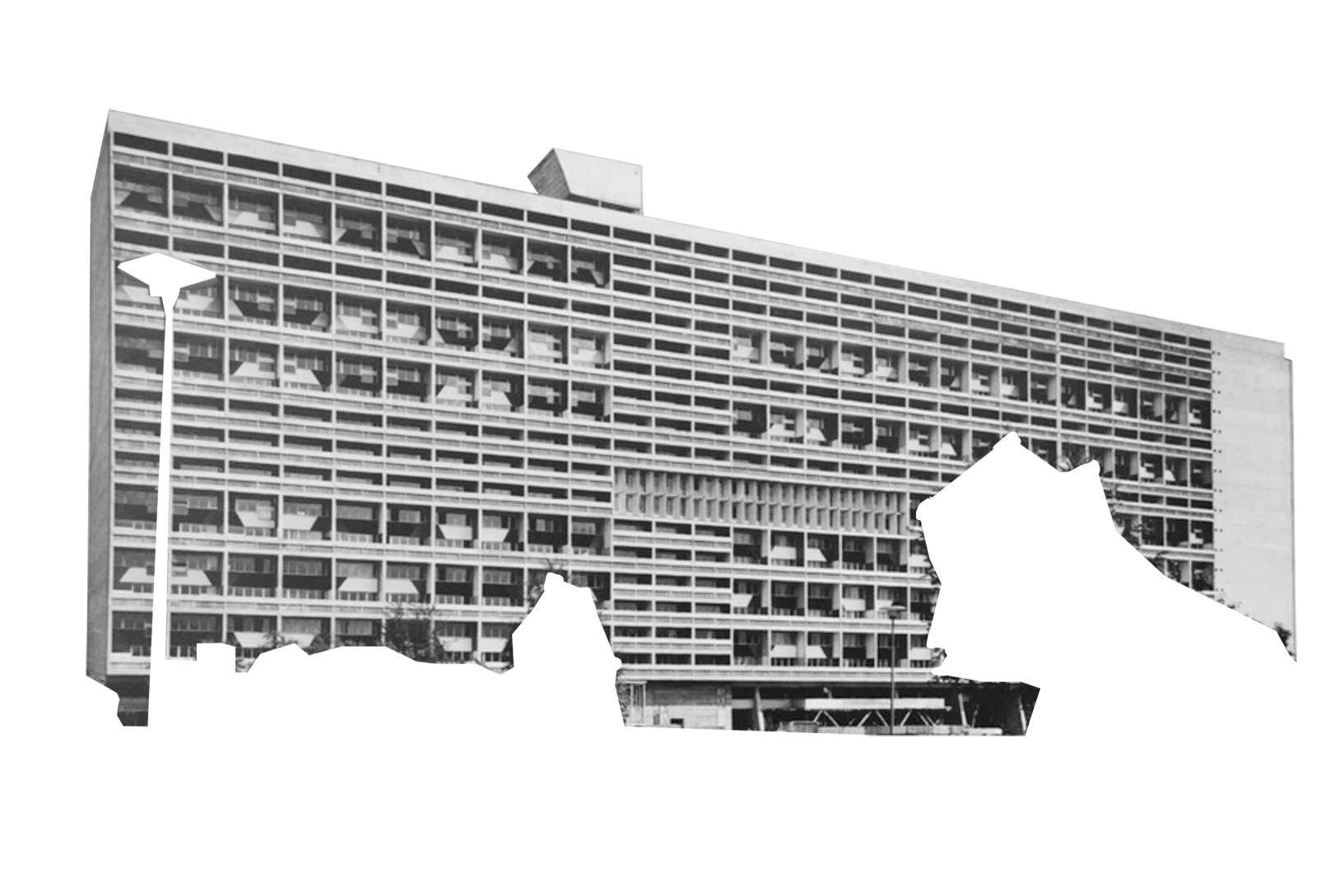 After crossing Le Corbusier’s architecture in Italy, France, Argentina and India, with the project started in 2015 My house is a Le Corbusier, Cristian Chironi takes in 2019 a new temporary residence in Germany, in Apartment 258 of the Unité d’Habitation in Berlin.

The Unitè d’Habitation is a residential building designed by Le Corbusier in 1957, conceived as part of the International Architecture Exhibition for Berlin marked by the post-war division between East and West Germany. The work is different from the other Unitè models because of the corrections decided by the technician in charge of the project, in order to respect the German building code. However, it represents the idea of a building as a “machine for living”, in line with Le Corbusier’s theories.

Apartment 258, now owned by Henrik and Natalia Svedlund, is located at Flatowallee 16 and is the result of some changes made by the architect Philipp Mohr between 2016-18, with the intention of respecting the original plans of Le Corbusier. The building and its rooms were repainted by combining the architectural polychromy proposed by Le Corbusier in 1931, a range of colours composed of 43 “architectural colours” in 12 atmospheres.

It is no coincidence that the same palette is used by Cristian Chironi to customize his Chameleon, Fiat 127 Special car so called because of its ability to change color according to the building in front of which it stops. The work, evolution and continuity of My house is a Le Corbusier, accompanies the artist in his movements and, in the new mutation dedicated to Apartment 258, will start from Orani (Nu), on November 5 towards Unitè d’Habitation, where it will remain exposed and accessible to the public as a sound installation, an amplified device that emits the collection My sound is a Le Corbusier, the compositions of the various musicians involved by Chironi in previous editions of the project.

For one week, from 9 to 16 November, Apartment 258 was granted to Cristian Chironi on a non-exclusive basis. The artist, invited by the owners to live with them for a specific time, wanted to include the spouses Svedlund in the work-project My house is in Le Corbusier giving him an active role and transforming them, Henrik artist-musician and Natalia brewing engineer, as real instruments, inspired by them for the realization of his works. Among the projects planned is a video produced with images of postcards collected by Le Corbusier during his travels with music by Henrik. Natalia will take care of and coordinate the organizational aspects and initiatives promoted during the residency. The entire apartment will be transformed into a yard of ideas and field of collaborations and will be open to the public in the form of an exhibition on Sunday 17.

This sixth residence, which falls on the 150th anniversary of the postcard and thirty years after the fall of the Berlin Wall, symbolically invokes the free movement and destruction of all borders.

My house is a Le Corbusier is at the same time a work in progress work, a workshop of ideas, a field of collaborations, an exhibition, as well as a residence. The project, started in 2015, has the ambition to be realized in a long period and to be the set of all the experiences that Chironi will be able to realize within the many works designed by Le Corbusier on 12 nations around the world. “Pilgrim dwellings” are inextricably linked to the movement and intersection of different geographies and cultures.

The project takes its cue from a real episode: in the second half of the sixties, the Sardinian artist Costantino Nivola, bound by a deep friendship and collaboration with the Architect Le Corbusier, passing through Orani (his country of origin and also of Chironi himself) entrusted to the family of his brother “Chischeddu” a project signed by the great architect, with the hope that, he and his sons bricklayers, about to build a new house, would scrupulously follow the instructions contained inside. However, the importance of this legacy was not acknowledged. Some time later, when Constantine returned from Long Island, he noticed that the house built did not correspond at all to the original characteristics and reacted by taking up that project again. The house, which is still in Orani, was built preferring to the modernist idea of the master a popular functionality (according to the whole family “had neither doors nor windows and looked more like a hovel than a house”) reports, perhaps, only the “mood” of that originality ignored.

From this story, Cristian Chironi identifies the narrative potential for an analysis of a series of contemporary relationships with consequent linguistic and socio-political implications, which vary depending on the context. In a historical period of difficult and precarious economic stability, he plunged into that impossibility of owning a house of his own and, in the exchange of barter, took the freedom to live in the houses of Le Corbusier present in the world. Chironi makes these houses “privileged observation posts”, to understand how the legacy of Le Corbusier is received today and in what condition is “The house of men”. A rendering of the architecture through the story and the direct taking of its spatial and temporal dimension, where you can discuss and compare, see the artist at work, attend events, learn about the material collected or drink together a coffee.

The project is enriched during each residence, producing works, meetings and exchanges that stratify into an ever wider result.

The residence My house is a Le Corbusier (Apartment 258 – Unité d’Habitation type Berlin) is supported by the Anna and Francesco Tampieri Collection of Nonantola (Mo) and is possible thanks to the kind hospitality of Henrik and Natalia Svedlund.