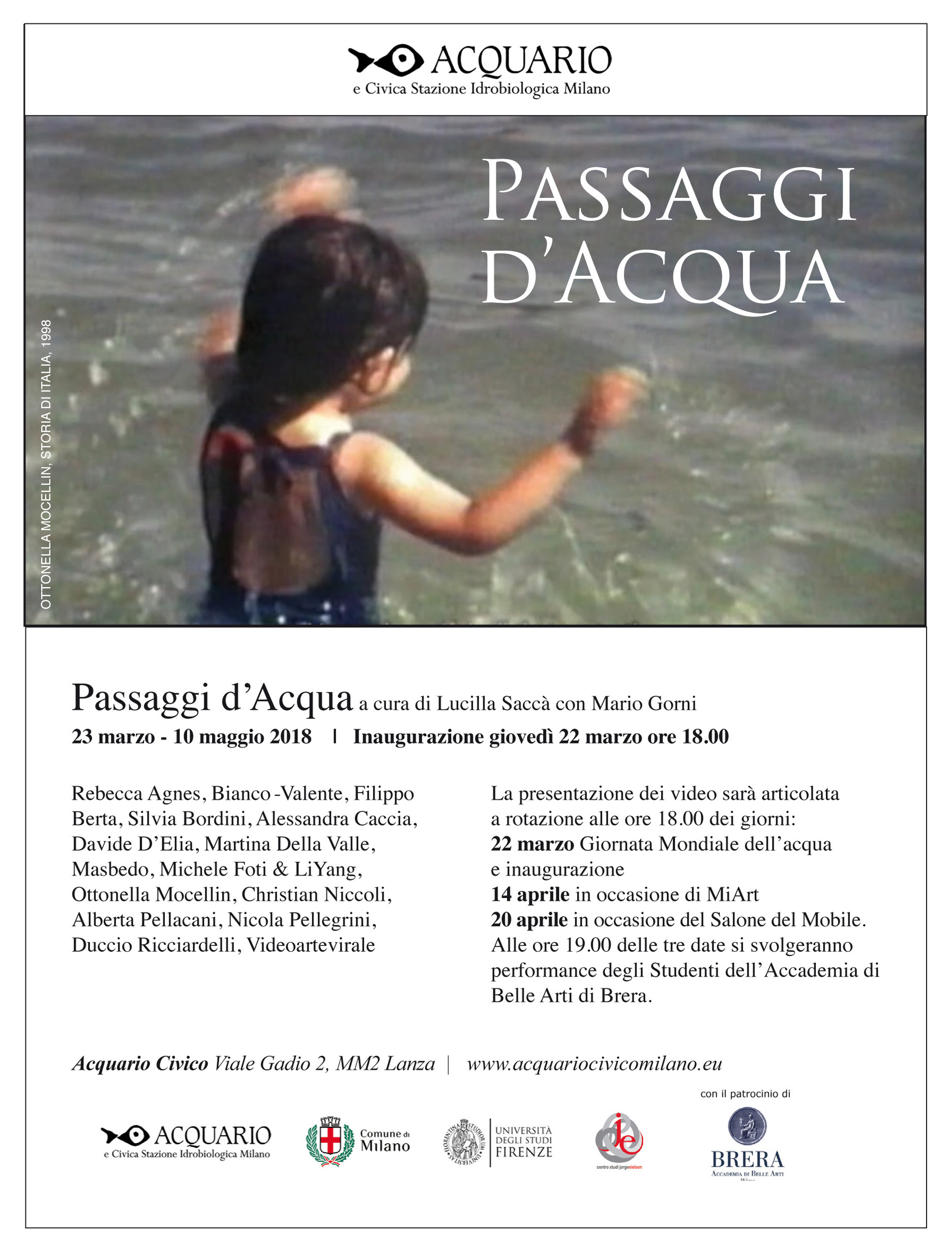 The Passaggi d’acqua exhibition, promoted and produced by the Municipality of Milan – Culture, Aquarium and Civic Hydrobiological Station of Milan, the University of Florence and the Cultural Center Jorge Eielson, curated by Lucilla Saccà with Mario Gorni, develops context of the research carried out by Lucilla Saccà herself, professor of History of Contemporary Art and by Martha Canfield, professor of American Hispanic Language and Literature and president of the Jorge Eielson Study Center both at the University of Florence.

On the World Water Day of March 22, 2018, it seems appropriate and motivated to realize an event that highlights the social, historical and aesthetic peculiarities of one of the most important and irreplaceable assets of our existence and our planet. The chosen site is the Civic Aquarium of Milan, which for its own destination is involved with the dimension of the underwater world and with the reality of the water element in all its possible variations.

A selection of videos of artists is presented, highlighting the multiform solutions of this precious natural heritage; from the work and the history that takes place on water, such as life, ports and the phenomenon of migration, to solutions that bring the fluidity of water into more existential, imaginary and metaphorical dimensions, to the more recent experiments of Living picture .

The videos have been realized by the artists Rebecca Agnes, Filippo Berta, Bianco-Valente, Silvia Bordini, Alessandra Caccia, Davide D’Elia, Martina Della Valle, Masbedo, Michele Foti & LiYang, Ottonella Mocellin, Christian Niccoli, Alberta Pellacani, Nicola Pellegrini , Duccio Ricciardelli and Videoartevirale.
The choice of video as a preferred medium is not accidental and proves extremely suitable for the representation of transparency and the capacity for rapid transformation of the water element.
The video projection also constitutes a visual expression complementary to the reality of the Aquarium, which itself lives on the staging of the dimension and fluidity of the underwater world.

After the presentations, the videos will be viewable in the Aquarius monitors at the beginning of the path of the tanks, for the duration of the exhibition.
For the communication and dissemination of the event, the involvement of the students of the Academy of Fine Arts of Brera of the courses of the teachers Maurizio Arcangeli and Clara Bonfiglio who will stage performances at the three presentations at 7.00 pm was also organized
With the participation of Silvia Bordini (Sapienza University of Rome), Guido Bartorelli (University of Padua), Pietro Gaglianò (Independent Curator of Florence), Silvia Grandi (University of Bologna).