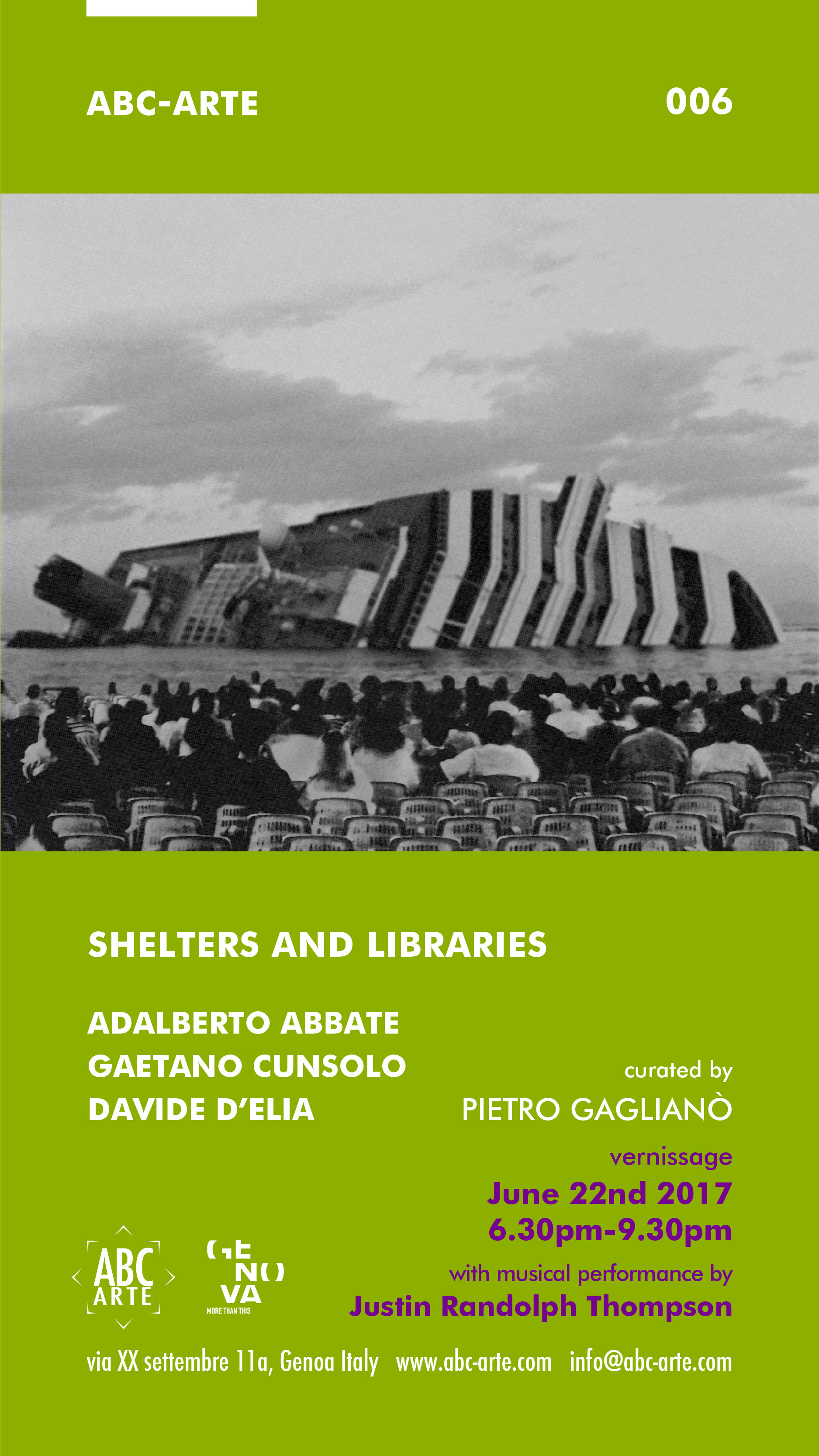 Shelters and Libraries Adalberto Abbate – Gaetano Cunsolo – Davide D’Elia curated by Pietro Gaglianò On Thursday June 22nd, at 6.30pm, in the presence of the three artists and curator, ABC-ARTE will open Shelters and Libraries, collective exhibition of Adalberto Abbate, Gaetano Cunsolo and Davide D’Elia, curated by Pietro Gaglianò. The exhibition, patronized by the Municipality of Genoa, will stay open until October 6th 2017. The opening night will include a performance by Justin Randolph Thompson artist born in New York City, co-founder of the Black History Month Florence. Thompson will present a musical performance, inspired by issues related to social displacement and mixed-race discrimination by dominating cultural systems. The concept of shelter, introduced by the title of the exhibition, refers to the two aspects of culture in the European tradition. The first interpretation focuses on official history, arranged through libraries, museums, archives and other institutions conceived for the selection, organization and conservation of elements considered as fundamental for the definition of culture and identity. Institutions for posterity, solid shelters in time and in space. These authorized narrations, as underlined by Jacques Derrida, segregate voluntarily into the oblivion all things that have been excluded, because considered invalid, unworthy, irrelevant and improper. Here, in the extended lands of repressed, stands the other aspect of shelter, characterized by chance. The confused, but never casual, accumulation of cultural facts, memories and leftovers, finds its own place in the outskirts of the official world. Outskirts, writes Iosif Brodskij, “are not where the world ends – they are precisely where it begins to unfurl”, and this “affects language no less than the eye”. The three artists involved in the exhibition work on these marginal fields: Adalberto Abbate, Gaetano Cunsolo and Davide D’Elia collect residues and show ruins or assemblages not representing the disintegration of the civilization we are used to define as the West, but focusing on its possible developments through layers of collective moral buildings. In the real world (and in the symbolic world of art), the shelter uses secondary solutions and substances, all the unspoken, which is able to describe the real essence of land and time. The gallery welcome works and installations realized specifically for this event: archive materials, retouched photographic images, objects saved from decay and replaced in a version echoing museums, but open to a contamination of languages and visions. A new precious book dedicated to this exhibition will be published in September 2017. As part of the bilingual series of ABC-ARTE Edizioni, in Italian and English, it will include the critical essay by the curator Pietro Gaglianò, images of the installations and works and a specific section for documents and critical analysis.