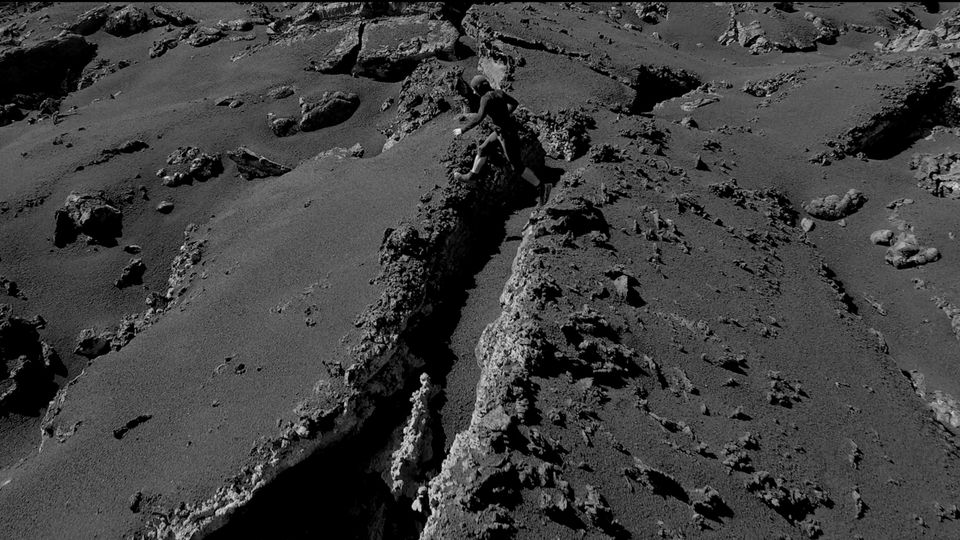 The exhibition LITHOSPHERE, from 24 October 2020 to 7 February 2021 at the Centro per l’arte contemporanea Luigi Pecci in Prato, consists of a video and a large environmental installation: A Fragmented World (2016) by Elena Mazzi and Sara Tirelli, and Productive (2018–2019) by Giorgio Andreotta Calò.

The exhibition – curated by Cristiana Perrella, Director of the Centro Pecci – is part of a line of research that tends to reinterpret and question the works in the permanent collection through dialogue and comparison with those from other collections.

A Fragmented World and Productive both originate from the suggestion of a journey to the centre of the Earth, and from the desire to represent the forces and materials that have shaped our planet over the course of geological eras.

Giorgio Andreotta acquired, reordered and catalogued around 2000 linear metres of coring from the Sulcis Iglesiente region (southwestern Sardinia), part of the Carbosulcis survey archive. The stratigraphic horizon corresponding to the production level, between -350 and -450 metres below sea level, was then reassembled on the floor: the various layers of rock visible in these cores reveal millennia of natural history and recount their story through a succession of materials such as siltstone, sandstone, micro-conglomerates, carbonaceous layers, beige limestone and lumachella, a stone containing fossilized snails. Highly fragile yet with a strong evocative presence, the long cylinders of Productive form a landscape that follows the stratigraphic succession, taking us back in time.

The work, shown in Milan in 2019 as part of the solo exhibition CittàdiMilano at the HangarBicocca of Fondazione Pirelli, which co-produced it, became part of the Centro Pecci’s collection in 2019 thanks to a donation by the artist, who wanted to divide it among the member museums of AMACI – Associazione dei Musei d’Arte Contemporanea Italiani (Association of Italian Contemporary Art Museums).

In this exhibition, for the first time a significant part has been reassembled which also includes the sections in the collections at MAXXI, GAMeC, MAMbo, FMAV, and from the artist’s archive.

A Fragmented World, a video by Elena Mazzi and Sara Tirelli also looks at the very slow time of the Earth, which is only apparently immobile and immutable, and of catastrophic events – eruptions, earthquakes – which represent an element of rupture and acceleration. Inspired by the Fracture Theory of the physicist Bruno Giorgini – which analyses the variables that lead to a crisis, understood both as a geo-physical and a socio-political phenomenon – the work refers to a condition of chaos, unpredictability and transformation, using images of Etna, some of which already existed having been produced for scientific purposes, and others shot for this work by the artists, with live sounds and sampling by the musician Giuseppe Cordaro.