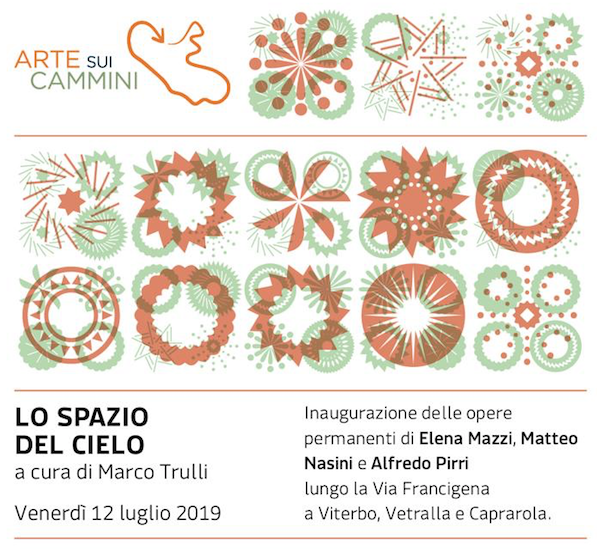 Three contemporary art interventions on a ring route of the Francigena between Viterbo, Vetralla and Caprarola

CoopCulture presents the project Lo spazio del cielo, a contemporary art project along the Via Francigena between Viterbo, Vetralla and Caprarola, one of the 7 projects selected by the Lazio Region as part of the Public Notice on Walking Art. CoopCulture is the largest cooperative operating in the field of cultural heritage and activities in Italy and currently operates in over 250 sites in Italy, including museums, libraries, places of art and culture. The project Lo spazio del cielo is part of the activities of enhancement and dissemination of the landscape and historical-artistic heritage promoted by CoopCulture with the aim of bringing different audiences closer to art. CoopCulture has long been committed to sustainability. The paths and the Francigena in particular, are an opportunity for the promotion of the territory and its beauties and for the idea of a tourism that is the opposite of the “hit and run” one: a personal and slow experience of the places, their history and their qualities to which also the contemporary interventions contribute.

On July 12, three of the four works provided by the project will be inaugurated through an itinerant event between Viterbo, Vetralla and Caprarola. The title of the project comes from the root of the term contemplation or from the Latin cum templum (in the middle of the space of the sky). It is the space identified by the lituo of the aùguri, a traced space that was then divided into regions of glory and evil in order to draw omens from the flight of birds and reproduced on the ground to identify places to make sacrifices for the gods. Therefore, the templum is the sacred geography that, right in the territory of ancient Etruria, suggested the identification of the first areas in which to found places of worship. The works, along a circular route around the caldera of Vico Lake , orient the pass, illuminate the route like lanterns, resonate in the landscape, are stations that always mark a border, the arrival in a town, the crossing of a limit, the beginning of a new phase of the journey. The route starts from the spa area of Viterbo, where Alfredo Pirri has identified in the guardhouse of the former Terme Inps, a complex that for years has been in a state of neglect, the possibility of defining a tangible sign for the walker about to arrive in Viterbo. Transform this small building, a small house of a few square meters, in a lit lantern. “Now the building stands there, an empty and abandoned space controlling a confluence of streets, a symbolic hinge between public and private, countryside and city. It is there like an immobile, aged and tired sentry waiting for the change. The building can become a sculpture. A luminous lantern with a solitary and solid shape. Brilliant at night, like a lighthouse that orients passers-by and that during the day returns mute with eyes and mouth blocked by the tremor of wings of birds in transit” (Alfredo Pirri). In Vetralla, Elena Mazzi‘s artistic intervention is part of the naturalistic area of Fossato Callo, near the Foro Cassio, where the landscape arrangement and the recovery of the peperino wash-houses are underway. 300,000 years in 344 centimeters, sculpture by Elena Mazzi, made in collaboration with Regula Zwicky, is a long slab of peperino raised by a pedestal in corten at the height of the hand, on which is carved a sort of sensitive map of the geological transformations of the landscape of Glass, due largely to the eruption of the volcano Vicano, from about 300,000 years ago. The sculpture is the result of a research conducted by the artist on the territory in collaboration with geologists and naturalists and is in fact a palimpsest of surfaces and shapes resulting from the different phenomena of petrification of the lava. The walkers will touch the stone, repeating the gesture of devotion of the pilgrims to the sacred icons and the sculpture will change over time. Finally, Campo sintonico by Matteo Nasini, a group of four corten installations located near the launch area of the hang gliders in the Reserve of  Vico Lake, intercepts the winds and produces a song of the landscape, a natural harmony that amplifies the suggestions of the landscape. The installation, composed of four sculptures that delimit an acoustic perimeter, is an eco-compatible project that has no environmental impact and produces a continuous, autonomous and indeterminate sound. The direction, type and intensity of the atmospheric elements determine a sound that cannot be catalogued as music, irreproducible and unique, creating the conditions for a specific and unpredictable human experience.