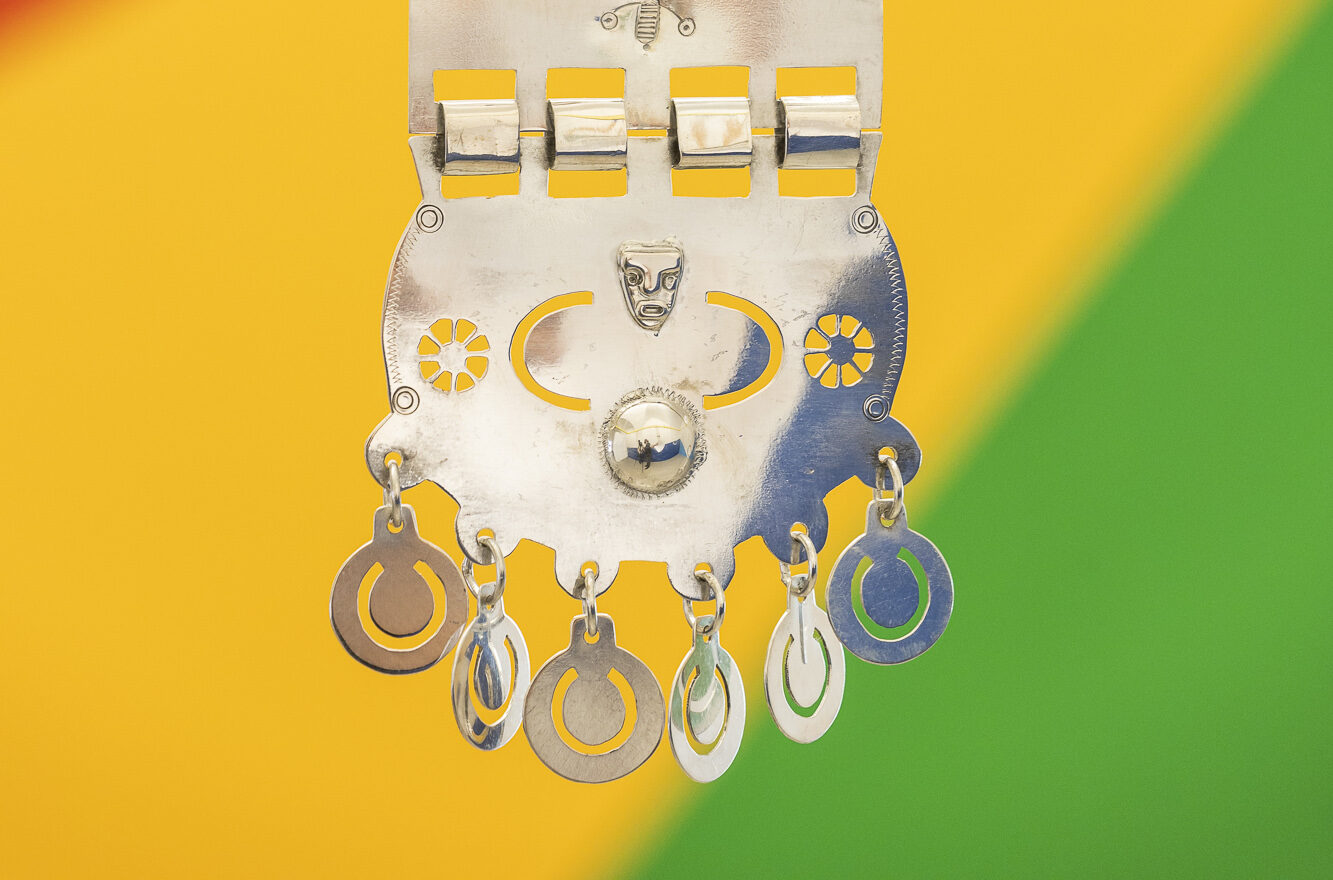 Silver Rights consists of a sound piece that runs every 30 minutes. For the best experience, start your visit in the exhibition on every whole and half hour! The sound is 22 min.

The show at Södertälje konsthall is the second iteration arising from the artist’s in-depth research process in Patagonia, a region for years at the centre of the Mapuche struggles, claims and land recoveries.

Silver Rights focuses on the ancestral bond between the communities and the land (mapu), a bond eroded and denied by colonising forces that have mutated over the centuries to gradually establish themselves in recent decades through neo-extractivist practices; a settlement process resulting from the convergence of investment policies and commercial agreements between South American governments and foreign multinationals, including the Italian Benetton.

More specifically, the works in the exhibition and the display itself respond to the narrative proposed by the Leleque Museum, an anthropological museum opened in 2000 in the very lands owned by Benetton; an ambiguous operation that dismisses the Mapuche people as an extinct culture rather than one that is alive and active in the disputed territory, ‘musealising’ their memory and material culture.

Elena Mazzi addresses this complexity by engaging in dialogue, supporting and expanding the dense network of relations that the Mapuche community has been consciously weaving for years; a way of understanding the art of diplomacy that, on the one hand, implies building and maintaining international relations between different political and cultural subjects, and, on the other, is implemented in their cosmovisions as a form of radical mediation between land, human and ‘more than human’ beings.

The central part of the exhibition consists of a series of silver jewellery pieces crafted by Mauro Millán and designed in collaboration with Elena Mazzi after a series of workshops on symbologies and current struggles, held with numerous members of the community. “The retrafe (silversmith) helps unite the collective and individual dimensions of the community, with the ultimate purpose of nourishing the collective,” writes Millán in his contribution to the book accompanying the project. He continues, “Mapuche silverwork is the synthesis of all collective needs and the tangible expression of a long and permanent conversation between the ancestors and the living in the Mapu.”

The jewels are preceded in the exhibition itinerary by an installation created by Elena Mazzi and Eduardo Molinari in which a precise composition of drawings and images on paper and fabric interacts with an audio sequence in four episodes. These four short stories were written collectively (with Enrica Camporesi) with a speculative approach that allowed them to interweave documented facts, oral tradition and dreams: the long history of violence perpetrated by historical figures such as General Julio Argentino Roca introduces the current struggle against expropriations and relocations as a result of the ambitions of “adventurous entrepreneurs” such as Carlo Benetton or Joe Lewis. The voices of the “Mountain”, as well as those of animal beings and spirits, that belong to the Mapuche cosmology, let emerge the disparity in the way these lands are occupied and the radical incomprehension behind certain choices such as the establishment of the Leleque Museum itself.

It is an ‘act of exhibiting’―supported by the display designed by Alessandro Mason (Studio GISTO)—that aims to consciously react to the museological narrative of Leleque, and therefore places the jewels within a constellation of references and information that are essential to their public presentation. It is a device that represents an expression of care and respect for these artefacts, bearers of ancestral knowledge and spirituality, and that, at the same time, reveals the impact of international companies in Patagonia; massive privatisation of land rich in raw materials and resources (including water), the consequent displacement of indigenous communities and the progressive erosion of their civil, social and political rights.

The exhibition Silver Rights was presented at ar/ge kunst, Bolzano (11.06 – 31.07.2021), Italian Institute of Culture of Buenos Aires and BIENALSUR (Autumn 2021). It will enter the collection of the Castello di Rivoli, Museum of Contemporary Art, Turin.

The project is supported by the Italian Council (7th Edition, 2019) program to promote Italian contemporary art in the world by the Directorate-General for Contemporary Creativity of the Italian Ministry of Culture.