ELENA MAZZI | To be played 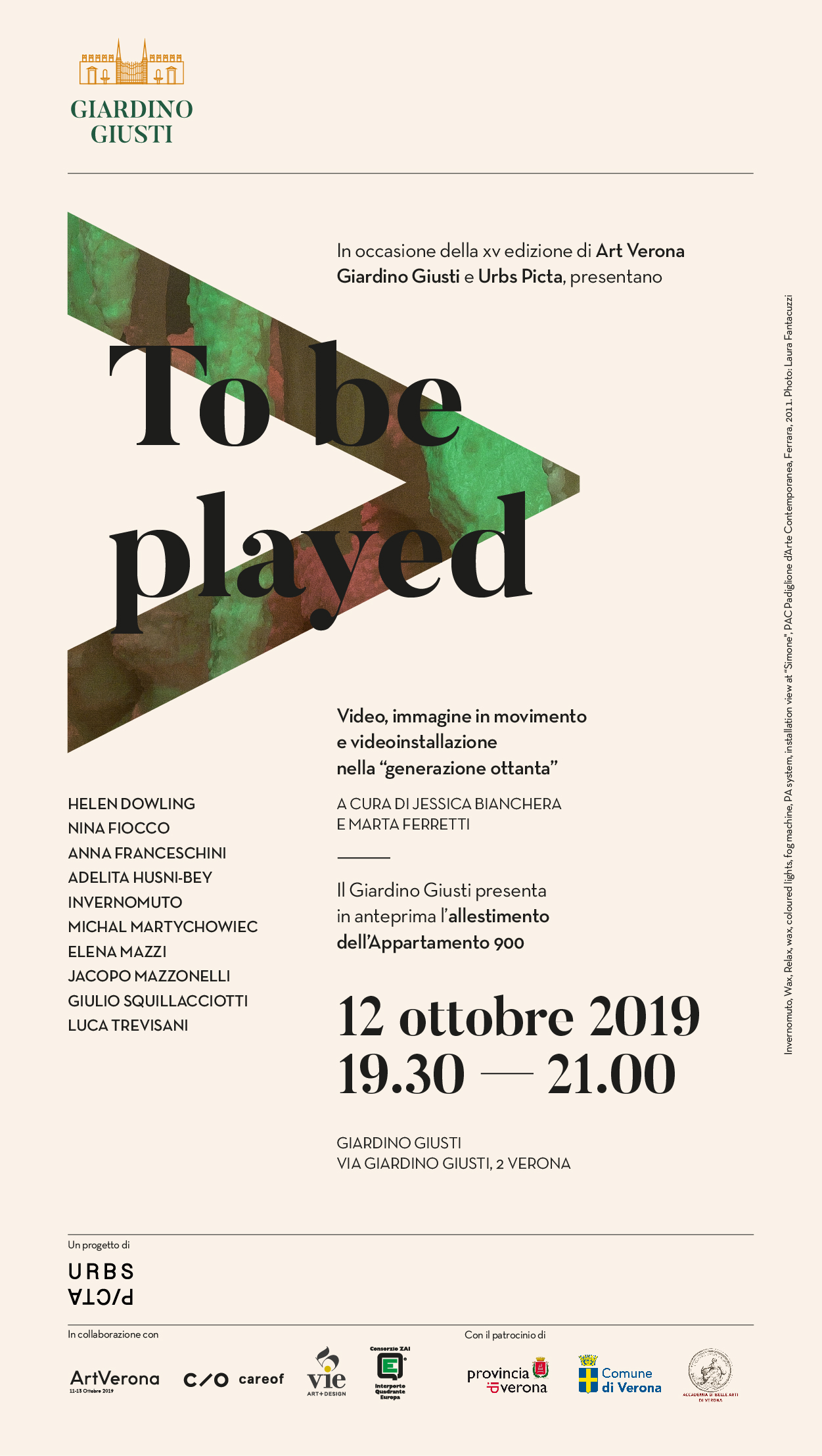 On the occasion of the 15th edition of ArtVerona, Giardino Giusti and Urbs Picta in collaboration with Careof present “To be Played – Video, moving image and video installation in the ‘eighties generation'”. For the occasion, Giardino Giusti presents Appartamento 900, the home of the Giusti family until 1944 and recently reopened to the public.

Giardino Giusti is the promoter of the Veronese cultural scene and chooses ArtVerona as the inaugural moment of this new path, participating in the program of projects and initiatives that will animate the Veronetta district during the days of the fair. Always considered one of the most interesting examples of Italian garden, with its Roman remains, the majestic avenue of cypresses and a labyrinth of the oldest in Europe, the Giusti Garden opens to contemporary art with the exhibition “To be played – Video, image in motion and video installation in the ‘eighties generation'”, open from October 11 to November 22, with admission from 9:00 to 19:00 (last at 18:30).

Introduced during the Sixties mainly as a documentation of performance practices and became an autonomous artistic language in the Seventies, the video is one of those artistic media that show a close correlation between the artistic research of the twentieth century and the field of technological innovation. Today, experimentation on video and moving images is one of the main protagonists of the research of a large group of artists who, after having assimilated the salient features of possible operations from their predecessors, have made them the object of a proliferation of languages that is the main feature of the contemporary era.

Curated by Jessica Bianchera and Marta Ferretti, in collaboration with ArtVerona and Careof, with the patronage of the Province of Verona, the City of Verona and the Academy of Fine Arts of Verona, the exhibition presents the work of a selection of young artists who work in a transversal way and with different approaches to the expressive, narrative and display possibilities of video. The recent productions of Helen Dowling, Nina Fiocco, Anna Franceschini, Adelita Husni-Bey, Invernomuto, Michal Martychowiec, Elena Mazzi, Jacopo Mazzonelli, Giulio Squillacciotti and Luca Trevisani build a complex panorama of connections and continuous references between different languages on the borderline between documentary, cinema, fiction and experimentation on moving images.

At the end of the avenue of cypresses that cuts through the garden of the sixteenth century. Here, where once a complex system of mirrors, camouflaged between the emergencies of the raw rock and the inserts of shells, created suggestive plays of light based on the hours of the day and the seasons, Pirolisi solare (2017) by Elena Mazzi deals with the theme of scientific research on renewable energy sources starting from an installation of mirrors created by her for a previous work (Reflecting Venice, 2012-2014). Finally, the generational question: by choosing to take a sample of those born in the Eighties, the aim is to start a critical analysis of the current state of research, proceeding according to a criterion dear to artistic historiography and at the same time focusing on young people who can already guarantee solidity in research.