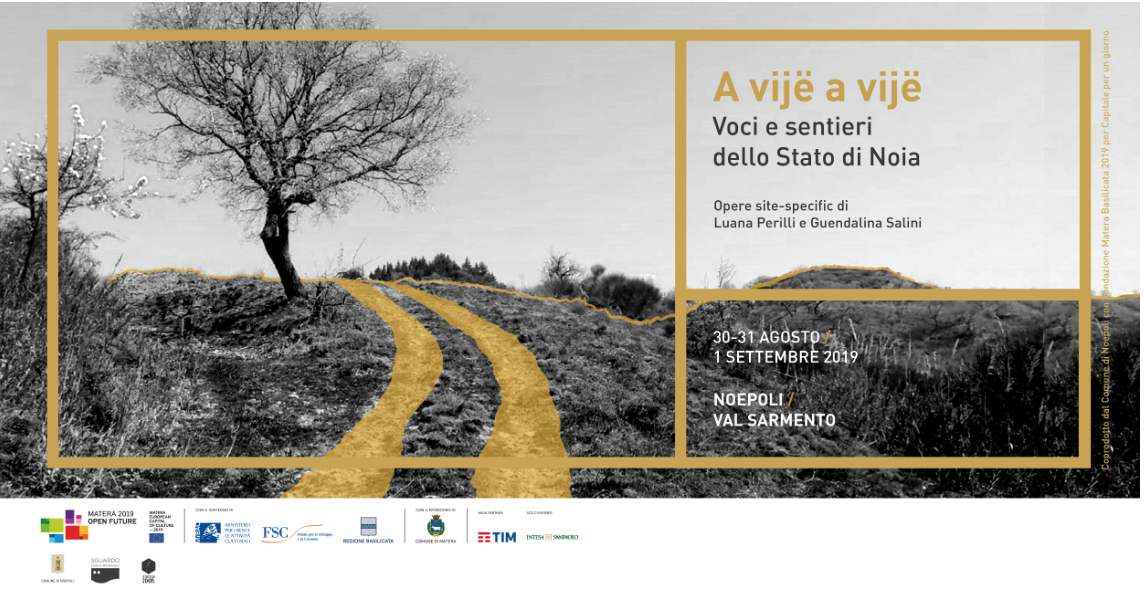 As part of the Matera European Capital of Culture 2019 project “Capital for a day”, the Municipality of Noepoli presents A vijë a vijë – Voices and paths of the State of Boredom.
“A vijë a vijë “, a dialectal expression meaning “from road to road”, “along the road, slowly” is an artistic itinerary of paths and narratives in the State of Boredom. By “State of Boredom” we mean, on the one hand, the name of the ancient feud that stretched from Mount Pollino, along the valley of the river Sarmento, which included the ancient Noja (now Noepoli) and the other five municipalities in the area, on the other hand that ‘restless indifference’ that characterizes the atmosphere and spirit of the residents: a physical and mental place together, territorial delimitation and emotional state.

The project aims to tell the identity of these places through art, used as a tool to approach the territory and as a vehicle for cultural action.
A vijë a vijë, in fact, by inserting itself in the theme of the Dossier of Matera 2019 “Reflections and Connections”, operates a positive re-reading of the state of boredom, understood as a prerequisite for ideas that emerge only with silence and slowness, moment of creative potential and new forms, through an initiative across the territory of the Sarmento Valley.

From 30 August to 1 September, two Roman artists, Guendalina Salini and Luana W. Perilli – invited to spend a period of residence in Noepoli – will present the site-specific installations created with the participation of the community, searching for stories and suggestions, investigating the collective imagination and weaving a dialogue with the oral tradition.

The residence of Guendalina Salini will be aimed at the realization of an unconventional territorial promotion campaign. Through photographic images elaborated by the artist together with the community, emotions, moods, lifestyles and immaterial values of the place represented as typical will emerge, capable of attracting the gaze of the temporary visitor but also of expanding it beyond the framed physical places, the fixed identities and the stereotyped narratives. Luana W. Perilli, on the other hand, will work on activating the path that leads from Noepoli to the Sarmento river, in order to exalt its narrative value. The artist will write some ‘key words’ with natural elements positioned along the path. These will be subject to the gaze of the traveller who crosses the path and from those written can receive suggestions and activate stories.

During the three days of the event will be presented the results of artistic residencies and organized narrative paths and moments of conviviality open to citizens.
On September 1, 2019, after a collective walk that will end in the shores of the river Sarmento at sunset, there will be a final event with the poet and landscape painter Franco Arminio and musicians Giuseppe Di Taranto (guitar, flutes and voice) and David Maria Viola (cello), which will be the moment of meeting of all countries in a place symbol of the valley.

The project, co-produced by the City of Noepoli and Fondazione Matera-Basilicata 2019 for “Capital for a day”, will be carried out in collaboration with the collective State of Boredom and the Association Contemporary Look.

Luana W. Perilli lives and works between Rome and Berlin. Her research investigates the relationships between the individual and collective dimensions, between nature and culture, from the field of memory and narratives to science, sociobiology and social effects, dealing with communities that respond to severe crises. In the internal areas of Cilento, for the association JAZZI, she has created a proposal focused on memory and oral narrative, understood as active presence, narrative landscape and collective sharing.

Guendalina Salini lives and works between Rome and southern Italy, where she has to her credit numerous experiences born from the encounter with fragile and temporary communities open to inclusion and a sense of identity, to forms of resistance, collaborating with different realities active on the territory (South-East Station, La Luna and the Calanques) and realizing artistic interventions participated in larger projects (GREEN ROUTES – program supported by the Foundation with the South).

Stato di Noia is a multidisciplinary collective that promotes the reactivation and enhancement of the six countries of the Sarmento Valley through art and culture. It is composed of Carmela Rinaldi and Nicoletta Guglielmucci (curators), Luana Perilli and Guendalina Salini (artists), Paola Brizi (cultural designer), Veronica Vitale (graphic recorder and trainer), Raffaele Carlomagno (teacher and writer).

Sguardo contemporaneo is a cultural association that since 2007 promotes and implements artistic projects characterized by a site-specific and socially engaged approach.