IULIA GHITA |He failed to save one he loved most 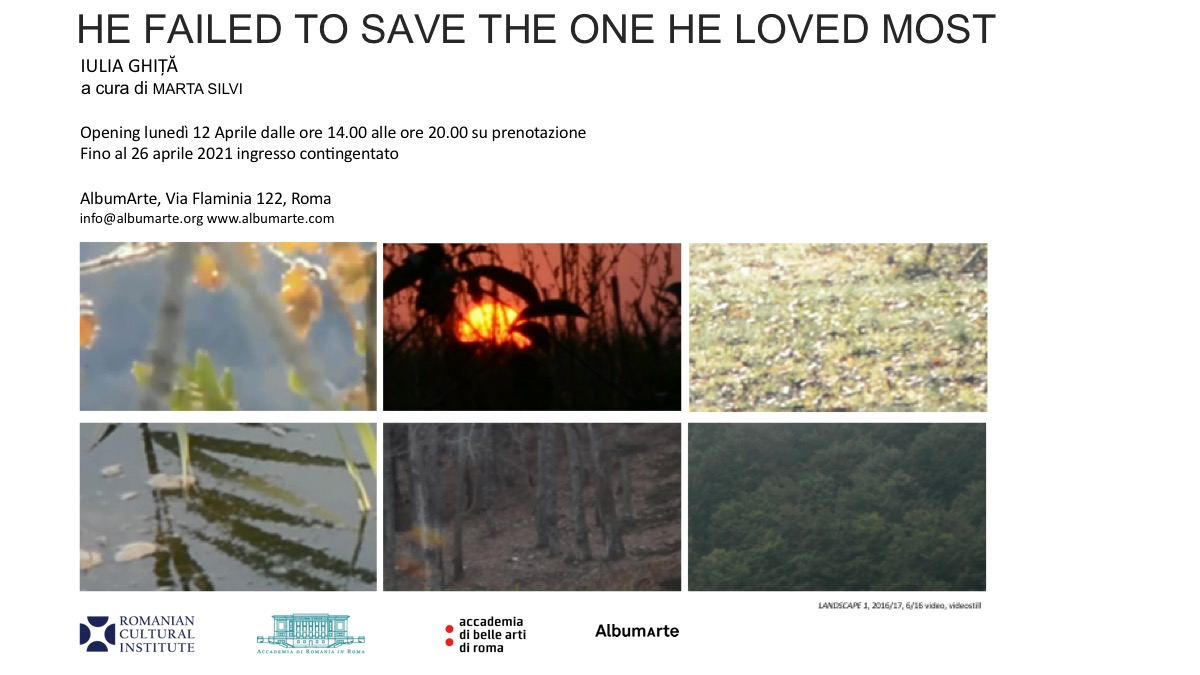 On Monday, April 12, 2021, the solo exhibition of the artist Iulia Ghiță entitled HE FAILED TO SAVE THE ONE HE LOVED MOST, curated by Marta Silvi, opens at AlbumArte, an independent space for contemporary art. The exhibition will remain open until Monday 26 April.

Exactly one year ago AlbumArte issued the press release of an exhibition that the first lock down would then have forced to cancel, relegating it to the ether of suspended projects. However, Iulia Ghiță’s work has not stopped, but has strengthened her questions and enriched the possibility of her answers, deepening themes and arguments in a nutshell to the work itself, making them particularly adherent to the reflections that arose in this difficult and dilated time.

So we wrote, unaware of the storm that would soon hit mankind: “Iulia Ghiță’s work has a strong installative character, even when she uses drawing and painting, as well as photography and video. The artist is interested in the relationship / conflict / tension that is triggered between the limit of human measure and the attempt to give a finite form to incomprehensible things. ”

Human measure and incomprehensible things are the characterizing binomial, the two poles of tension that generate the field of research on which the artist has always investigated and which, this last year with greater evidence, has become the horizon and limit of daily considerations. Iulia lei explores ways of knowledge that are difficult to accept as such: dreams, revelations, premonitions, prophecies, visions. The artist questions the form and location that boundless themes such as trust and knowledge can assume.

The exhibition develops around three bodies of works: two multichannel video installations that capture different corners of nature, LANDSCAPE2 (2017/2018) and LANDSCAPE4 (2018-20), and numerous drawings on wall paper that intersect at times with the same projections, Life from herself (understood) (2016/20), Closed circle (2018-20), Untitled (2020), There was a beautiful vase at her home / the truth resides in the object, not in the word (2019) .

The works, regardless of the medium used, exacerbate the admired gaze towards the surrounding nature as an alternative way of knowledge to investigation and the pretense of empathy. A way of seeing and of understanding life “as it is” later found by the artist in the theories of the Swiss philosopher Paul Häberlin, who in the same way recounted human existence.
In addition to the original project, the exhibition has been enriched with a strong pictorial and narrative component arising around the theme of treatment, therapy in the etymological sense of the term, inspired by the deepening of a figure to whom Iulia Ghiță has been turning her attention for some time: Archbishop San Luca, to the world Valentin Feliksovič Vojno-Jasenetsky, who lived in Russian territory between 1877 and 1961, known for his important scientific achievements in the medical surgical field and for the profound pìetas that accompanied his life and his actions, which inspires the large canvas THEY BELIEVED THAT THE MERE TOUCH WOULD HELP THEM HEAL FROM ANY ILLNESS.
What can art do in the face of critical situations, of physical need? The artist seems to ask himself an existential question that is as simple as it is fundamental. The answer is neither obvious nor univocal and must be stimulated collectively.

Iulia Ghiță was born in Oltenita, Romania, in 1986, she lives and works in Abruzzo. She graduated from the University of Art in Bucharest in 2008 and from the Academy of Fine Arts in Rome in 2011. Among her most recent exhibitions and participations, in 2019: 3650, Ex Elettrofonica, Rome; AlbumArte20x20, 2019, AlbumArte, Rome; AUGUST Life from herself (Understood), Studio Giudecca 860, Giudecca, Venice (personal exhibition); Life from herself (Understood), Alviani Art Space, Pescara (personal exhibition); All right all right, National Gallery of Cosenza, Cosenza; Entasi, exhibition promoted by Arco di Gallieno, Roman Aquarium, Rome; Vis-a-vis, The Oort Cloud, Rome. In June 2021, an exhibition by Iulia Ghiță will be premiered at the National Museum of the Romanian Peasant. The installation and accompaniment of the artist’s book on the museum’s collection are curated by Cornelia Lauf, in a series coordinated by Ilina Schileru. www.iuliaghita.com