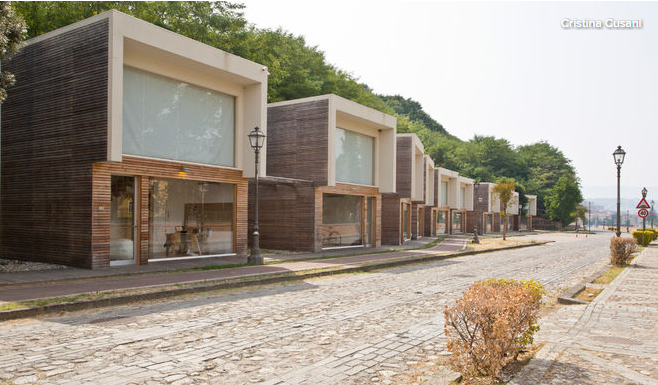 The artist Iulia Ghita will participate in the residence from October 10.

The common thread that links the original idea of BoCs Art to the development of the city of Cosenza and, consequently, their concrete and significant experience, can be summarized in two words: innovation and creativity. Where there is creativity, there is innovation. And where there is innovation there is always growth of the territory.
It is no coincidence that the reality of The BoCs (the box of conteporary spaces) and the artistic residences that have alternated in recent years in the area south of Cosenza have been built within the historic center. The choice of the Administration was targeted. Here we find the places that represent the Gateway to Culture, as part of a process of evolution between ancient and contemporary. Entering it means travelling in space and time, leaving tangible signs of a passage that is embodied in the works of the artists donated to the city but also – perhaps mainly – in the interaction with the residents who have shown themselves to be spontaneously involved in this path, embracing with gestures of welcome artists from other Italian municipalities and from all over the world

The BoCs Art -Residenze Artistiche Cosenza, inaugurated on 4 July 2015, are located on the boulevard Norman Douglas. A creative and innovative space in constant dialogue with the territory. A physical and inspirational place for the artists who, from all over the world, come to Cosenza to experiment, shape and share their works with the city. A veritable district of creativity, a Central European atmosphere, a rare form of urban redevelopment.
There are 27 wooden studio-boxes that follow one another on the bank of the river Crati, distinguishing themselves but integrating with the surrounding urban context. In the BoCs the artists hosted have the opportunity to work and stay in close contact with the territory, creating on the spot works of art that remain part of the city’s heritage.
Already in the first year of activity, about 150 artists, both Italian and foreign, were hosted for six sessions in total.  Different generations in comparison and multiple artistic researches: from painting to sculpture, from photography to installations, from performances to videos. Atélier also for young emerging artists, where everyone could attend live the creation of works of art and participate in workshops.
Since then, almost 400 artists have lived, created and left their creative mark in the BoCs Art Residences in Cosenza.
In 2015, the municipal administration of Cosenza, with this project received in Naples, the first Smau Prize Section “Communities”, as an innovative project in the field of cultural production.

The works made during the residence will be exhibited in the final exhibition that will take place in the bocs themselves on 27 October, and then both in the BoCs Museum that you can in the homes of citizens and / or institutions of Cosenza to create a museum.