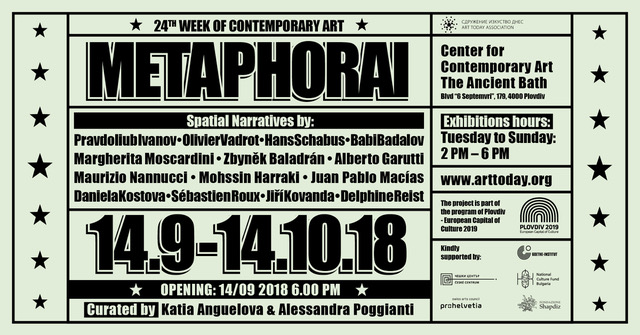 “IN MODERN ATHENS, the vehicles of mass transportation are called metaphorai. To go to work or come home, one takes a “metaphor”—a bus or a train. Stories could also take this noble name: every day, they traverse and organize places; they select and link them together; they make sentences and itineraries out of them“(Michel de Certeau, Spatial Stories in The Practice of Everyday Life [Berkeley: University of California Press, 1984]).

Metaphorai is an exhibition that consists of 13 different narrations articulated within the spaces of Plovdiv’s Ancient Bath. Following Michel de Certeau, each of these narrations, which we may call “metaphors”, arise out of those places we traverse, organize, select
and connect every day, creating sentences and itineraries that work as valences for spatial displacements of many kinds – from syntactic and semantic to pragmatic ones.
Each narration tells the story of its own movement, implies its own change of position; it narrates its own passage from one point to another, adapting and re-adapting itself to changing spatial features and rules. Each one of the artists acts as a narrative machine;
they insert their own lived experiences, their own listening capacity, a valence of various chunks of knowledge filling up the gaps left behind by urban planning. The artists produce a swarm of metaphors and signs organized through different methods and
narrative actions inside the exhibition space.

The exhibition Metaphorai is a narrative device whose authors are artists, readers of the city; while walking, they move, travel, find-and-write narrations, create a multitude of metaphors opening a semiotic vital flux, not an escape route: “The great and only error
lies in thinking that a line of flight consists in fleeing from life; the flight into the imaginary, or into art. On the contrary, to flee is to produce the real, to create life, to find a weapon”.
(Deleuze G, Parnet C., Dialogues, Columbia Univ Press, 1989).