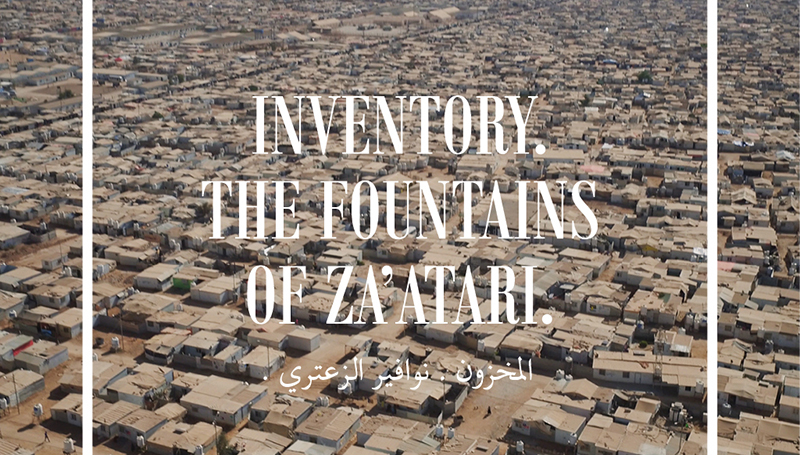 Inventory. The Fountains of Za’atari is a project by artist Margherita Moscardini, the result of her work carried out at Camp Za’atari in Jordan, the second largest refugee camp in the world. The project promoted by the Fondazione Pastificio Cerere is the winner of the first edition of the Italian Council 2017 competition devised by the Directorate General for Contemporary Art and Architecture and Urban Peripheries (DGAAP) of the Ministry of Cultural Heritage and Tourism, in order to promote contemporary Italian art around the world.

Palermo, with its strategic position in the Mediterranean is the emblem of migration and acceptance and as such the ideal location, during the opening of Manifesta12, to officially launch Margherita Moscardini’s project.

To end
Daniela Bigi (Professor at the Fine Arts Academy of Palermo) and Giuseppe Buzzotta (Artist), co-directors of #MCCN Castello di Carini, present the workshop which will be held by Margherita Moscardini on the 18th, 19th and 20th of June, aimed at students from the Fine Arts Academy in Palermo.

Camp Za’atari opened in Jordan in 2012 to welcome Syrian refugees fleeing the civil war. By 2015 it reached a population of 150.000, making it the fourth largest city in Jordan. Today there are 80.000 Syrians who still reside there.

“Za’atari provided us with a privileged observation of a place upon which enormous resources, experimental technology and advanced energy facilities were invested. Allowing us to witness the rapidity with which a city can be formed today; in only five years the desert was transformed, first into a tent city and then into a city with its own economy”. (M. Moscardini).

Margherita Moscardini has been working in the camp since September 2017, observing it through the double paradigm the condition of the refugees poses us with, on the one hand the questioning of the concept of Europe, United Nations and the nation-states, on the other the rethinking of camps as urban realities. Can these cities be understood not only in the contingent of a humanitarian crisis, but in the long term, as a virtuous system with which the most forward thinking minds can dedicate themselves to the quest for alternative legal, economic and social models which can eventually be exported and potentially even replace the notion of the nation-state?

Moscardini starts with the observation of the water system within the camp, producing an inventory of the fountains built by the residents inside their homes, imagining their international diffusion, in the long term, as sculptures through a virtuous system of acquisitions.

During the talk future developments and different phases of the project will be illustrated. Specifically the first presentation of the work which will be part of the exhibition curated by Marcello Smarrelli, to be held at Fondazione Pastificio Cerere in Rome – opening on July 11th – and the production of the artist’s book and sculptures, destined to the collection at Madre · Museo d’Arte Contemporanea Donnaregina di Napoli.

The talk will also be an opportunity to present the workshop, which will last three days and is addressed to the students of the Academy of Fine Arts in Palermo which will take place at #MCCN Castello di Carini from June 18th – 20th. The workshop, held by Margherita Moscardini, will be a laboratory for the production that invites students to imagine an artistic intervention for the camp- city of Za’atari, as a case-study, and will reflect the most current global concerns in terms of the protection of heritage, the effectiveness of international cultural institutions, the right to housing, rapid geopolitical change and the consequent humanitarian emergencies.

Inventory. The Fountains of Za’atari was realised with the support of the Italian Embassy in Amman, Jordan; The Khalid Shoman Foundation, Darat al Funun, Amman; AICS Amman; UNHCR. In collaboration with the collective, directed by Abu Tammam Al Khedeiwi Al Nabilsi and Marta Bellingreri.

The talk will be held in Italian.