Margherita Moscardini | THE FOUNTAINS OF ZA’ATARI 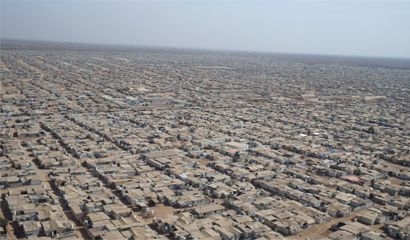 For the 2019 Fotografia Europea festival, entitled “Bonding. Intimacy, relationships, new worlds”, Collezione Maramotti presents The Fountains of Za’atari, a multidimensional project from artist Margherita Moscardini that has been in development since 2015, based on research into refugee camps as urban spaces that are destined to last.

Although they are meant to be temporary, according to the United Nations High Commissioner for Refugees (UNHCR) the average camp remains in use for 17 years.
The Za’atari refugee camp, located in a semi-desert area of northern Jordan, was founded  in 2012 to house Syrians fleeing conflict in their home country. In 2014 its population reached 150,000, making it the second largest refugee camp in the world. Today it has roughly 80,000 residents, and Za’atari is recognised as the fourth-largest city in Jordan in terms of its area.
Moscardini worked both outside and inside the camp between September 2017 and March 2018 to produce an inventory of the courtyards with fountains that residents have built inside their homes. This mapping project was carried out alongside the journalist Marta Bellingreri and a working group managed by the engineer Abu Tammam Al Khedeiwi Al Nabilsi, with the goal of producing a catalogue of the courtyards in book form.
The Fountains of Za’atariaims to establish a system through which local governments and civic institutions can buy life-size sculptures that reproduce the various courtyards with fountains in the Za’atari camp, for display in public spaces across Europe. The designer of the fountain will benefit directly from the sale, thereby creating a virtuous system that supports the camp’s economy.

Moscardini’s idea is that the sculptures, modelled on courtyards with fountains, should receive special jurisdiction that includes elements of extraterritoriality, which over time would qualify them as spaces where the law does not apply, “black holes and power vacuums on national soil”.
This ambition responds to questions posed by the artist: how can one convey the condition of stateless people in search of refuge in sculptural form? And, leaving symbolism aside, can an object be granted all the immunities enjoyed (thanks to various agreements) by the Earth’s states and governmental bodies?

An early version of the The Fountains of Za’atariproject was presented at the Fondazione Pastificio Cerere in Rome in 2018, after it won the first Italian Council competition, promoted by the  Italian Ministry of Cultural Heritage and Activities.
In Reggio Emilia, Moscardini’s project has grown, developing a new level of complexity and establishing itself as a fully-functioning system.
Two elements will be presented: the first public sculpture (for which the legal process of bestowing extraterritoriality has begun) in one of the city’s parks – supported by Collezione Maramotti and welcomed in a spirit of enthusiasm and collaboration by the Municipality of Reggio Emilia – and an artist’s book narrating the project’s themes and expanding on them in various directions.
The book, in two volumes, will be published in 2019. It will include an unofficial guide to the camp – recounted through its private monuments – which can be used by other governments and institutions across Europe as a catalogue and a tool for purchasing (and reproducing) the various designs of courtyards with fountains. The second volume will contain several major theoretical contributions on the themes touched upon by Moscardini’s art: the increasingly important role cities play as organisms that can react efficiently to the shortcomings of national states, and how they are reclaiming their sovereignty more than ever before; the need to rethink refugee camps, considering them as urban areas destined to last, and even as models that could potentially be exported; the creation of a virtuous system that allows the sale of fountains/sculptures to build the camp’s economy; research into a legal process to give sculptures aspects of extraterritoriality, so they can qualify as objects for which the law does not apply; and the condition of being stateless and in search of refuge as a paradigm for our age.
Finally, the Pattern Room at Collezione Maramotti will host a temporary exhibition that looks in more depth at the project, featuring artworks, videos and drawings created by Margherita Moscardini in recent years.

Public launch of the fountain sculpture:
To be defined

Launch of the exhibition, by invitation only:
13 April 2019, at 6.00pm:
Collezione Maramotti, Via Fratelli Cervi 66, Reggio Emilia.
The artist will be present.