Ex Elettrofonica  presents the first solo exhibition in Italy of the Swiss artist Angela Marzullo (born Zurich 1971), curated by Anna Cestelli Guidi.
Angela’s artistic enquiry, which uses any and every means of expression, is centred on revisiting works – literary texts (Walter Benjamin, Brecht, Pasolini) as well as works of visual art (Acconci, Rosler, Graham, Abramovic,…) and principles of the thought and crucial art of the nineteen seventies.
Her appropriation of the texts and works of the past is filtered through the lense of the Italian and French feminist thought elaborated in that same decade. Angela’s gaze is heir to that tradition, and thus aware of the ideological charge that images carry, starting from sexual difference: hers is the gaze of an artist and, at the same time, of a woman and a mother.
From this stems an attention to education, to pedagogy, to the mother-daughter relationship, all themes central to her poetic; from this comes the challenging title of the exhibition, Home Schooling, where home schooling is the demand of a line of thinking that another education, another transmission of knowledge is possible, outside of any instition: that of “home”, of mother to daughter, following a practice ever more widespread in Northern Europe.
So, Angela’s daughters are the only protagonists of the videos present in the exhibition: Lucie and Stella. It is the two children who read the 1968 SCUM radical feminist manifesto, who interact with the words of Walter Benjamin, of Pasolini or of Arendt, or who carry out the performance Semiotic of the Kitchen by Martha Rosler. Through their child voices Angela Marzullo manages to breathe new life into the texts and works of crucial thought of the past, recuperating in this way that energy which seems to have been blocked, yet today seems more necessary than ever in order to imagine a radical reconstruction of ethics and politics.

Besides the presentation of her last video work unseen before in Italy, La crisi dell’educazione (The Crisis of Education), 2011, paraphrases of the book “The Crisis of Culture” by Hannah Arendt, the exhibition will include the projection of the video Concettina, inspired by the “Lutheran Letters” of Pasolini, realized by the artist in Rome in 2010 while she was resident at the Institute of Swiss Culture. The third work to speak of the artist’s interest in the ethical aspect of pedagogy is the video Théatre prolétarien pour enfants of 2006. Here too the dialogues between Lucie and Stella, based on texts by Walter Benjamin and Goethe, have an architectural background of the nineteen seventies.
On display there will also be the video Performing of 2005, which marks the beginning of the series of works with her daughters: in this video Lucie and Stella, 10 and 6 years old, present anew six seminal video-performances of the seventies – Acconci, Rosler, Rousopoulos, Abramovic, Dan Graham, Abramovich and Ulay. The last video is Bodybuilding, a brief irreverent loop where Angela provocatively puts into view her “femininity”.
The sound-based work MereFille, 2012, made for the occasion, closes the exhibition. A monologue of a text that is almost a mantra, the work speaks of the ambiguity and difficulty of the mother-daughter rapport which is at the origin of that symbolic order of the mother necessary, as Luisa Muraro tells us, in order to imagine the possibility of a different vision of the world. 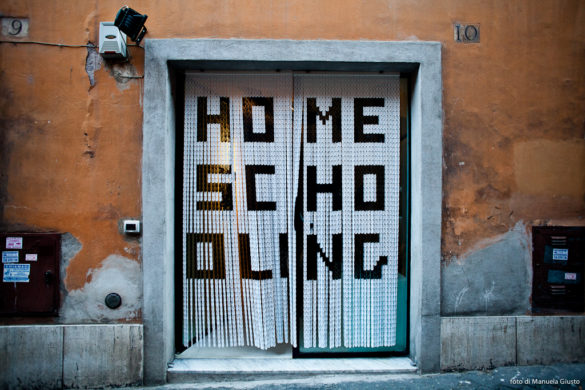 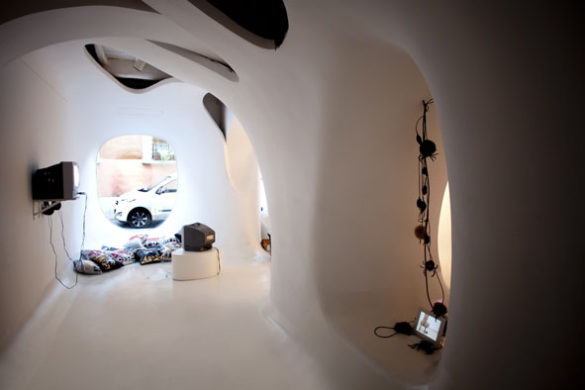 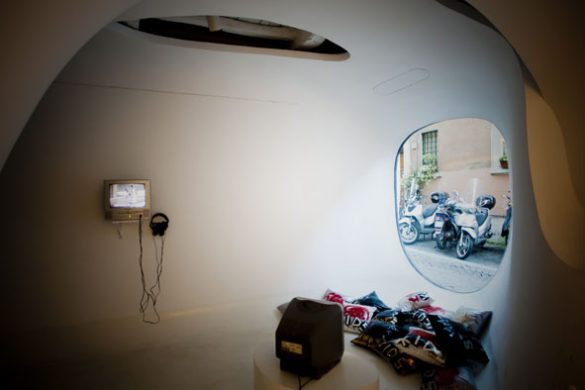 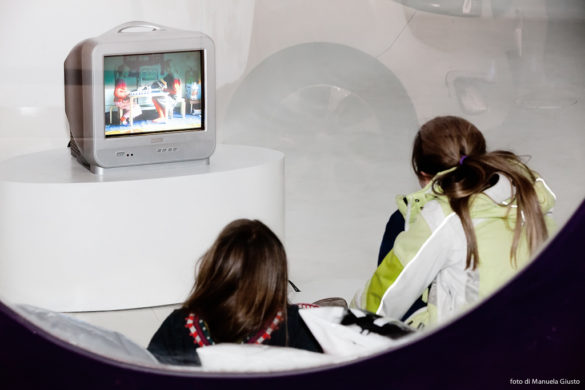 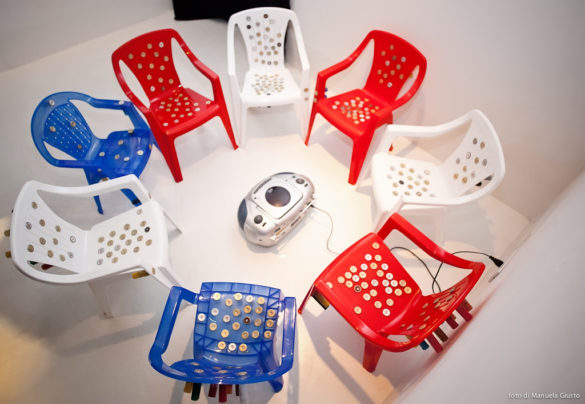 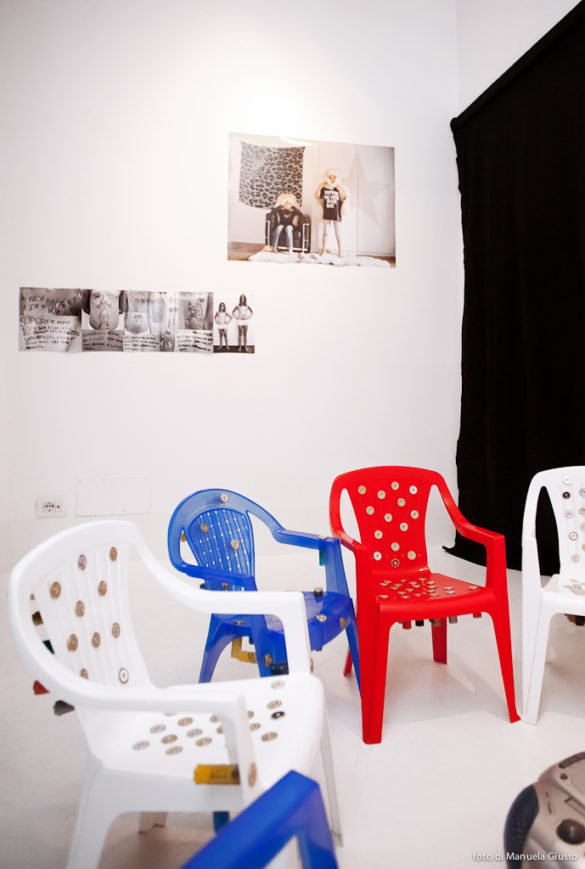 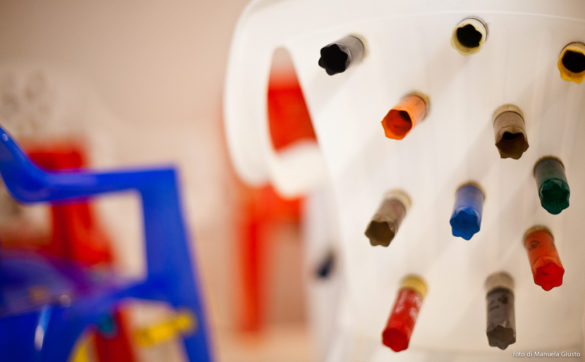 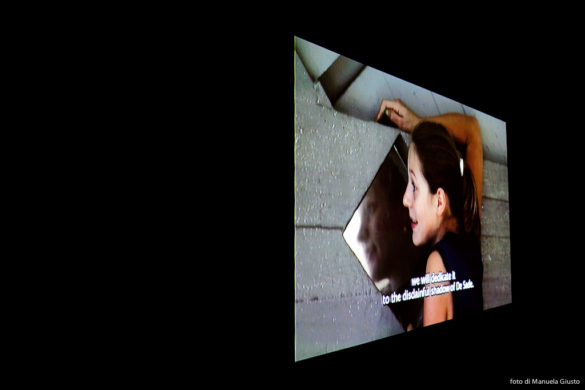 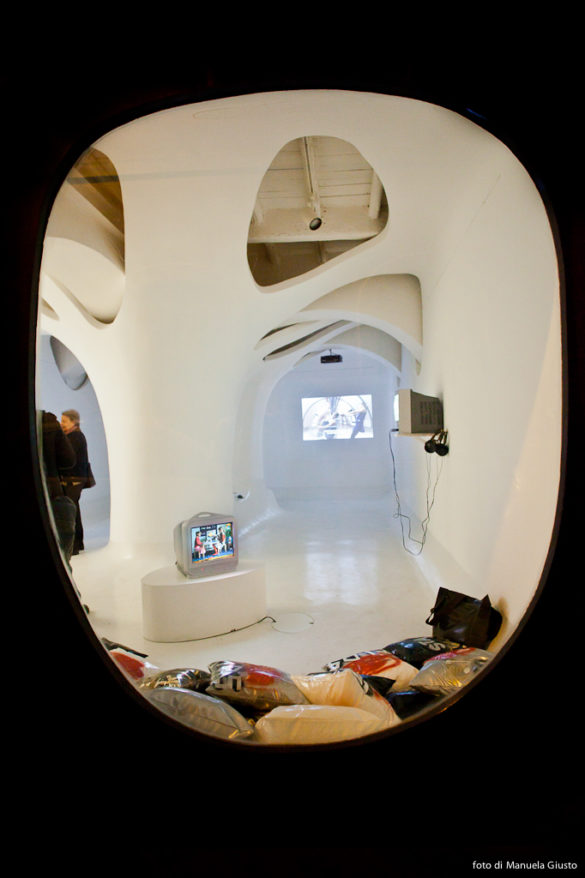