Ex Elettrofonica re-opens after the summer break on September 28 withNUCLEAR REACTION COSMIC INTERACTION, LUDOVICA GIOSCIA’S first solo show in the gallery.
The show reads as an encyclopedia, or rather a cosmogony, of the artist’s practice. The gallery acquires a new skin made from screen printed wallpaper and other materials. These are layered, ripped and sculpted in situ by the artist, transforming the gallery into a cave-like environment. Having lived in London since 1996, the artist returns to the city of her birth with an introspective project that looks at how our digital unconscious shapes our way of being.

The show is both a site-specific and an immersive project. Different types of work will activate the gallery surfaces. Certain areas will host Giant Decollages made frommy trademark custom wallpaper or with wallpapers received from the future, as well as various other materials. This cacophonic lexicon mirrors the persistence of images and memories within the schizophrenic languages of social media that fundamentally impact our perception of reality. The latter becomes increasingly fragile, ever harder to trust amidst the phenomenon of fake news. As Laurence Scott says in his latest book Picnic, Comma, Lightning: “Fiction is outperforming reality”.

Reality’s boundaries are further dissolved as our worlds are overturned by the digital revolution. Our previous interface with reality was the outside world – increasingly that interface has become our personal sphere. For the first time in history we have the possibility to share with the entire world our most intimate feelings and moments. This process, which is exponentially embraced by social media platforms, has led to a magnification of our private life and personal memories. The latter have become pervasive, and reiterate throughout our daily lives, in infinite permutations, altered by filters that dress them in different colours and scents.We are encouraged by commercial and social forces to view the public and the private, the outside and the inside, as constantly fused into a singular vision.

The Infinite Present’s latest evolution is an introspective assemblage, enlarged and projected on the walls of Ex Elettrofonica. Not only is the linear timeline collapsing into one infinitely expanding space, the boundaries between reality and fiction, between our inner and outside worlds are evaporating.

The protagonist of this environment is my mother and I imagine her pursuing research into fringe physics in her laboratory. There are many references to her projects, which I interpret through the psychedelic filters of my imagination, alongside other memories and textures from the flat in which we lived. As a character in one of Mavis Gallant’s short stories says: “The only authentic voices belong to the dead’.

My mother’s laboratory is superimposed onto my studio, both being places of constant alchemical experimentation. Many works communicate these experiments and the transmutation of materials, such as my new paper maches. In the latter I pulp debris from old and future works to generate particular new shapes, such as fan-like shapes. In her bedroom, the most intimate space after the bathroom, my mother used to live surrounded by antique fans.

During the opening I will be wearing a revisited lab coat, made in collaboration with artist James Stopforth. This is part of a new series, the Mad Lab Coats, which bears witness to the experiments that take place on a daily basis in the studio. 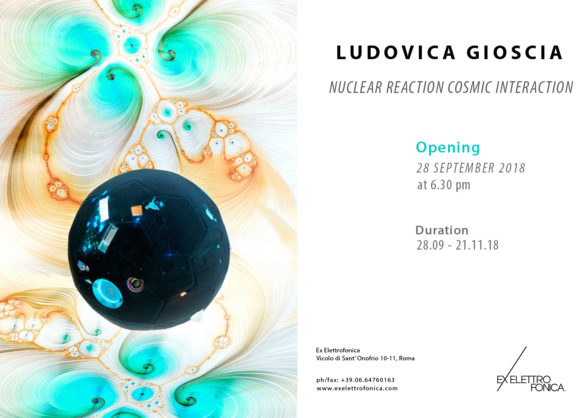 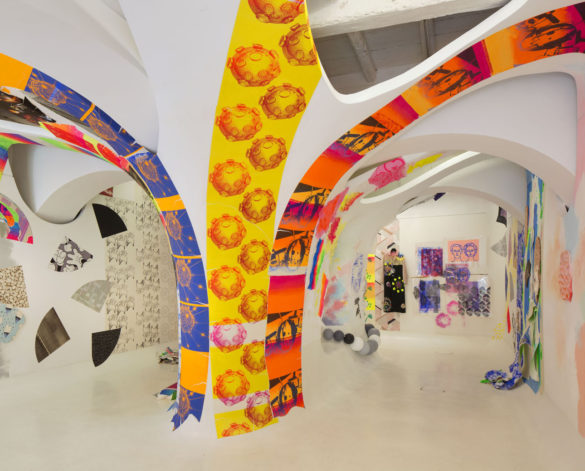 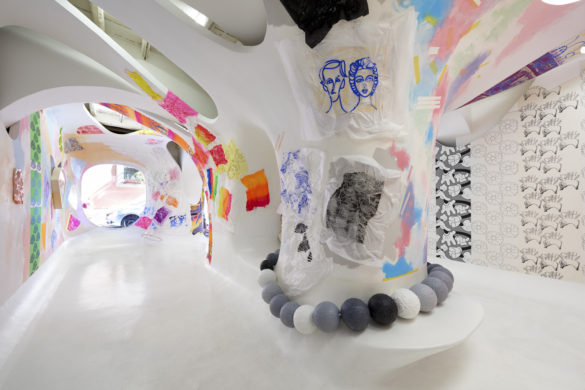 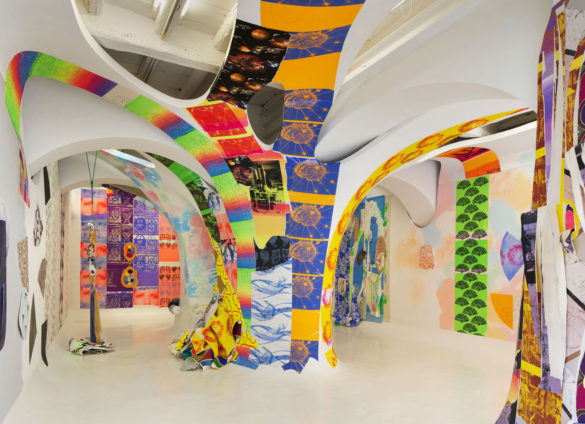 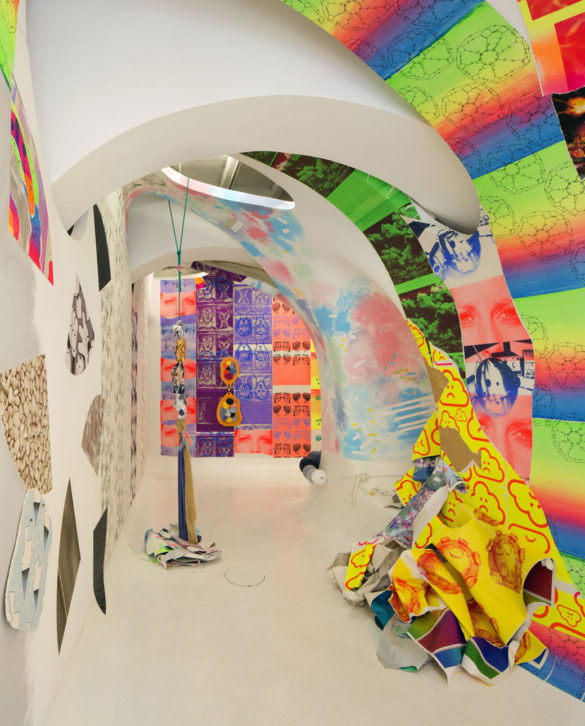 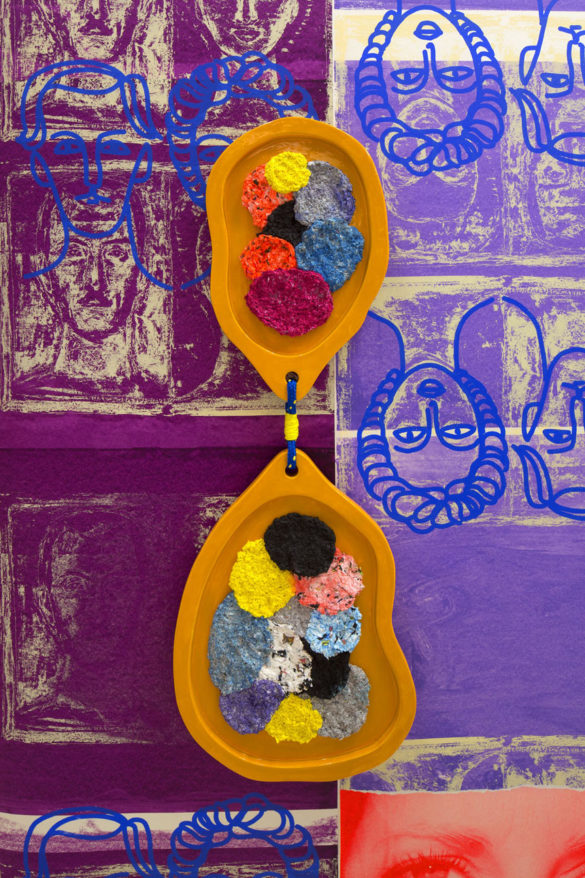 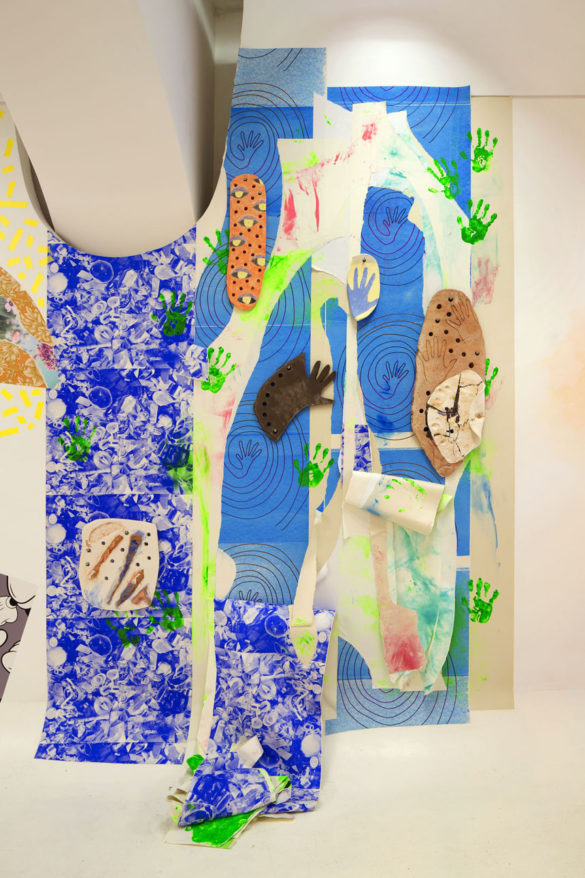 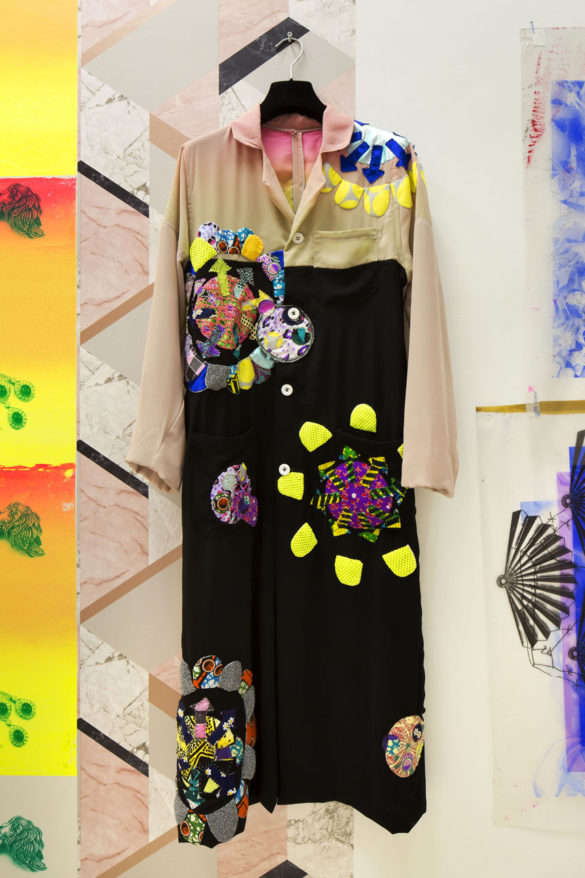 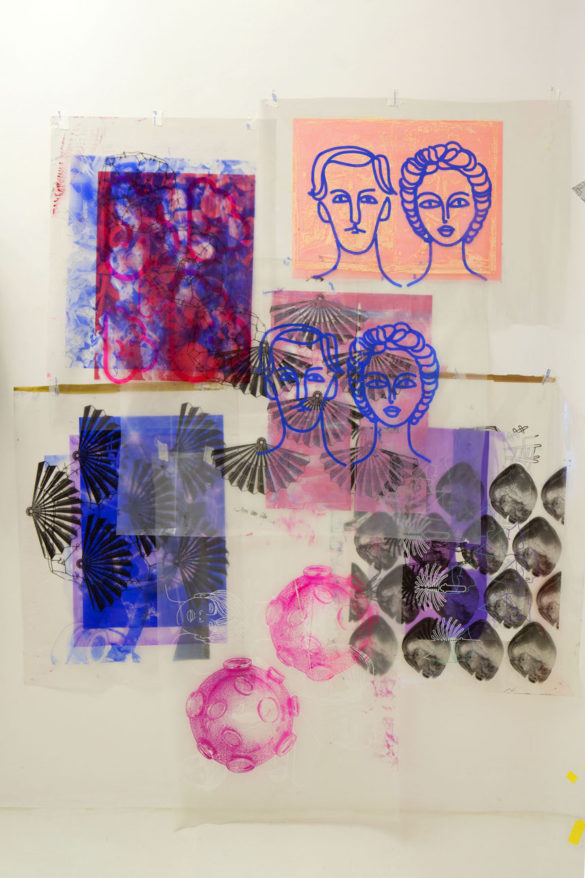