On 7 February 2018, the Italian National Olympic Committee in PyeongChang will inaugurate Casa Italia on the occasion of the XXIII Olympic Winter Games in South Korea.
The Yongpyong Golf Club in PyeongChang will host the Italian delegation and its guests in a modern shelter, enclosed in glass walls, capable of evoking a strong sense of immersion in the mountain nature that surrounds it. Also on this occasion, Casa Italia presents itself as the result of a project that aims to enhance Italian excellence in sport, art, design and hospitality, with a new concept: PROSPECTUM.
Former Elettrofonica was called by CONI to formulate an art project within Casa Italia capable of interpreting the message that the Olympic delegation brings with it to Korea. The goal is to present our country through a cultural invention recognized throughout the world: the representation of perspective. An idea that has revolutionized the way we see reality and interpret it, and which at Casa Italia 2018 is updated and modernized by a contemporary language. PROSPECTUM is a Latin word able to immediately evoke our civilization, to speak of the Italian cultural complexity and how this has managed to influence the vision of the future of the whole West. At the same time, it also represents the all-Italian ability to understand and accept points of view different from one’s own, to shift one’s perspective to achieve new results and set new goals. PROSPECTUM literally means “to carry on”. If from a technical point of view the perspective is a set of geometric and mathematical projections that make it possible to represent the image of a figure within a space, from a cultural point of view it is a much more complex concept.

The artists Gea Casolaro reveals how each image contains a story of glances that surpasses the work itself. In the work South # 01, present at Casa Italia, the artist reflects on the importance of the gaze of others in the construction of the work. The landscapes created in New Zealand, literally on the other side of the world, become legible only when shown upside down. Cristian Chironi uses different languages ​​and materials, creating works that interact with the context that welcomes them. The large PVC curtain that characterizes the restaurant room is a collage where natural elements and human artefacts coexist in an ideal chaos, where each element is subjectively told. Carlo and Fabio Ingrassia are homozygous twins who only work together. For the realization of the three Novecentist Abstractions present in the lounges, the two artists paint compositions of infinitesimal dimensions, approaching them at the same time from two sides. This is possible by virtue of their natural predisposition: one of the brothers is, in fact, left-handed. Davide Monaldi creates ceramic sculptures, poetic and minimal creations that tell intimate micro-stories related to everyday life, ennobling the craftsmanship process. At Casa Italia there is his famous Wallpaper, which makes what is usually perceived as a background three-dimensional and sculptural. A key figure in that Italian research of the second half of the twentieth century that moved between work, architecture and the urban landscape, Maurizio Nannucci explores the relationships between art and language with works in which the word finally recovers the strength of the symbol. In 1967 he presented his iconic texts made with neon lamps for the first time. Among the various permanent installations are the one at the Auditorium of the Parco della Musica in Rome, at the Fiumicino airport in Rome, at the Bibliothek des Deutschen Bundestages in Berlin, at the MAXXI in Rome and at the Peggy Guggenheim Museum in Venice. He has participated in several editions of the Venice Biennale, the Documenta in Kassel, and the Biennials of Sao Paulo, Sydney, Istanbul and Valencia and his works are present in the collections of the MoMA in New York, the Stedelijk Museum in Amsterdam, the Center Pompidou of Paris and the Paul Getty Art Center in Los Angeles. Casa Italia is honored to have one of his works to enrich the PROSPECTUM project.

After training in dramaturgy at the University of Milan, Valerio Rocco Orlando specialized in film directing at the Queen Mary in London. The relationship between art and education, the role of relationships and the exchange of knowledge in artistic practice are the themes most frequently addressed in his work. On display (Who I’m?) Is a luminous work, with Korean characters, created in Seoul in 2015 and is the result of a series of meditation meetings with a Korean monk. For Valerio Rocco Orlando, as for Casa Italia, the exchange of knowledge, by any means, is the only vehicle for understanding the other.

Patrick Tuttofuoco creates a neon that reproduces the silhouette of his hands that mimic the word “welcome”. Welcome defines a space within the space, changing the perception and function of the entrance: from a neutral place, of passage and information, to a space for meeting, exchange and cultural enjoyment. The meeting point between Casa Italia and its guests expresses a sign of welcome that, through sheer visibility, goes beyond national linguistic codes.

In Massimo Uberti‘s work, light is at the center of a path of subtraction: in the installations, the presence of light becomes the raw material – to the point of being the work itself. Space is only lighting, and thanks to the renunciation of clutter, it manages to become infinite. The CasaLuce work on display at Casa Italia is the luminous drawing of an ideal house and is the guiding work of PROSPECTUM. 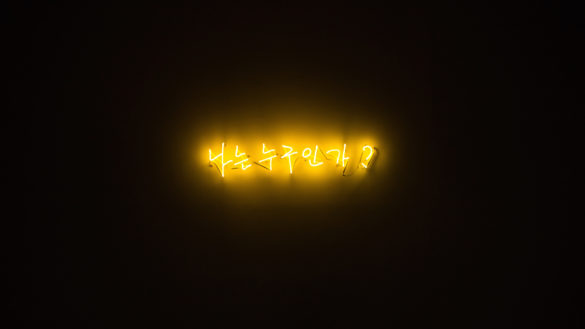