Ex Elettrofonica and secondome present the Twiner # 8 – Shiny Happy People exhibition, hosted in the Corporate Hospitality lounges, inside LEA and on Viale delle Olimpiadi on the occasion of the BNL Internationals of Italy, inside the Foro Italico.

The exhibition, set up both indoors and outdoors, is a quote from a well-known song by R.e.m. 1991, the year of the outbreak of the Gulf War. The video clip of the song was opened by an elderly man who, pedaling on a bicycle, by means of a mechanism, made the colorful scenography of the video move, while the words Happy and shining people holding hands were resounding. The exhibition aims to follow this suggestion, setting in motion an empathic machine capable of transmitting the strength of a smile and hope to change the world around us. The idea is precisely to bring to the attention of the public a monument to humanity received in its most disparate forms, a hymn to peace as an objective to always pursue.

A message of positivity that can also be interpreted as a cue for the rebirth of sports activities, after the Covid 19 pandemic, and of the public who can return to assist you.

The artists involved in this edition belong to very different environments, sensitivities, ages, and symbolize precisely this need to recognize value wherever one encounters it.

The English painter and sculptor James Hillman presents three works that evoke ships, called Ship, and with them a perspective of movement and discovery that becomes laughing in the strong and bright colors. The works of Elisa Montessori, born in 1931, enhance the authority gallery and speak of private and collective ceremonies to be rediscovered to give meaning to our actions. The artist Lorenzo Pace creates pictorial works for this appointment using kites as canvases. The positive meaning that these infantile objects carry with them is overturned by the need to have a maneuverer to govern them. Michela Picchi‘s pop style opens up to a fantastic and vitalizing imaginary, often populated by animals with vitamin colors, while Giuseppe Pietroniro with his installation of swinging doors in the seven colors of the peace flag speaks to us of the need and the difficulty of finding a balance in the pursuit of harmony. Alessandra Roveda‘s site specific intervention focuses on sport, practiced by surreal creatures who celebrate the beauty of playing together. Finally, the large Early Work canvases by Vedovamazzei present at LEA show the childish painting technique combining it with the history of art: when thinking is fun.

A gigantic installation of 140 Tulip Lamps by Marc Sadler for Slamp on a mirrored ceiling, from which handcrafted luminous flowers bloom with brushed brass stems, stands out in the center of Lea.The restaurant furnished with the solid wood tables by Studio F and the Gina and Gilda chairs in methacrylate by Jacopo Foggini for Edra are reflected in it, giving life to a play of lights and colors.

In the lounge area, the large On the Rocks sofas by Francesco Binfarè and the Favela armchairs by the Campana brothers for Edra with the Fusto tables in lightened concrete by Studio Irvine for Forma & Cemento.
In the Dehor the Re-trouvè tables and armchairs by Patricia Urquiola for Emu, which reinterpret traditional forms in an ironic and contemporary way.
The Accordèon Gold lamps by Marc Sadler for Slamp frame the Bar, evoking the plissé of a fabric or the bellows of an accordion.

Each Lounge of the central is a wunderkammer, where the design pieces interact with the works of art.
In the Authority stand, the blue Margherita armchair by Jacopo Foggini for Edra takes center stage. The Blue Velvet armchairs by the Campana brothers (Edra) frame it. towards the field, the Betty Stools by Studio Irvine for Forma and Cemento are reminiscent of a surrealist sculpture.
In the Foro italico Club stands a large Absolu sofa in green velvet by Francesco Binfarè (Edra) with two tables in recovered Miscellaneus marble by Millim studio, with a small installation of Getsuen armchairs by Masanori Umeda for Edra.
The south Montemario has deliberately cool tones, the white Flap sofa by Francesco Binfarè (Edra) contrasted with the Coffee Table Alter in burnt wood by Millim Studio for Studio F. with a sculptural silver Vermella armchair by the Campana brothers for Edra.
The Montemario Nord, in contrast has warm tones from the brown of the Essential sofa by Francesco Binfarè to the Margherita amber and gold polycarbonate armchairs by Jacopo Foggini all for Edra, with the Luna Park coffee table by Alessandro Zambelli in Murano glass (secondome). 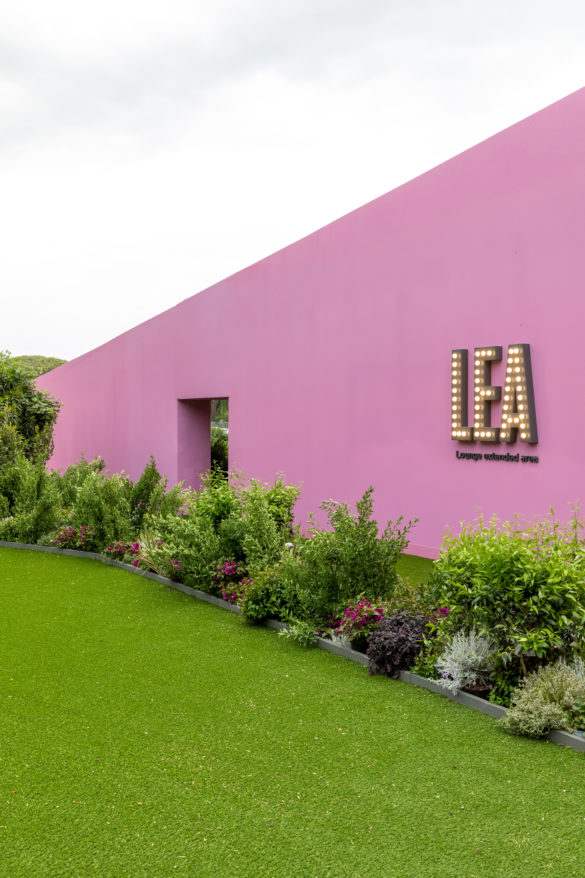 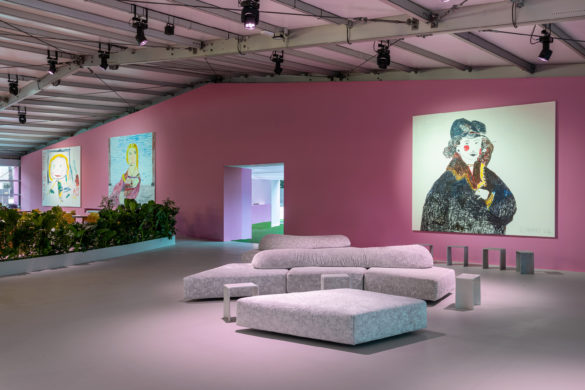 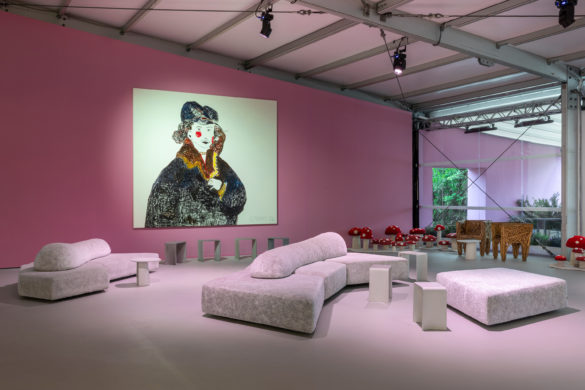 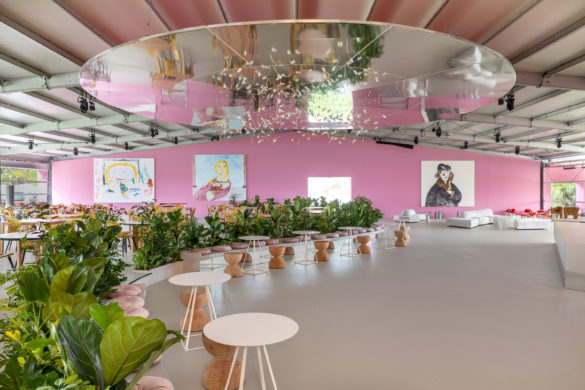 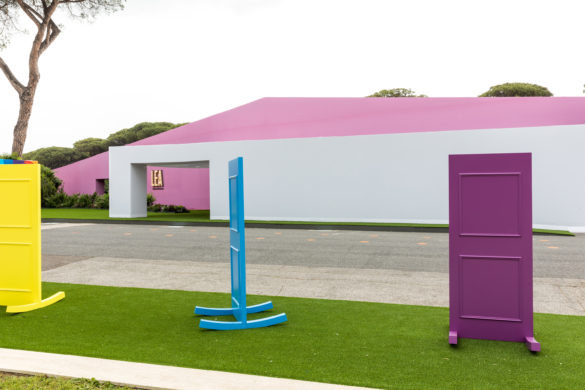 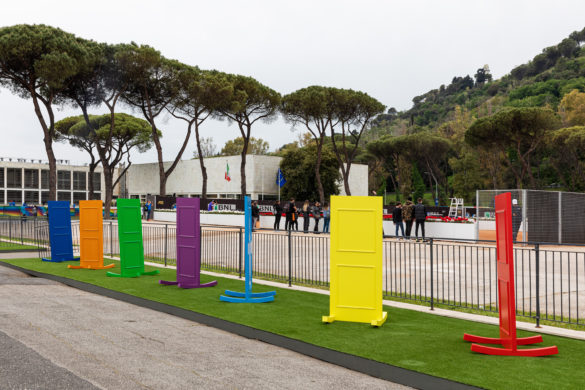 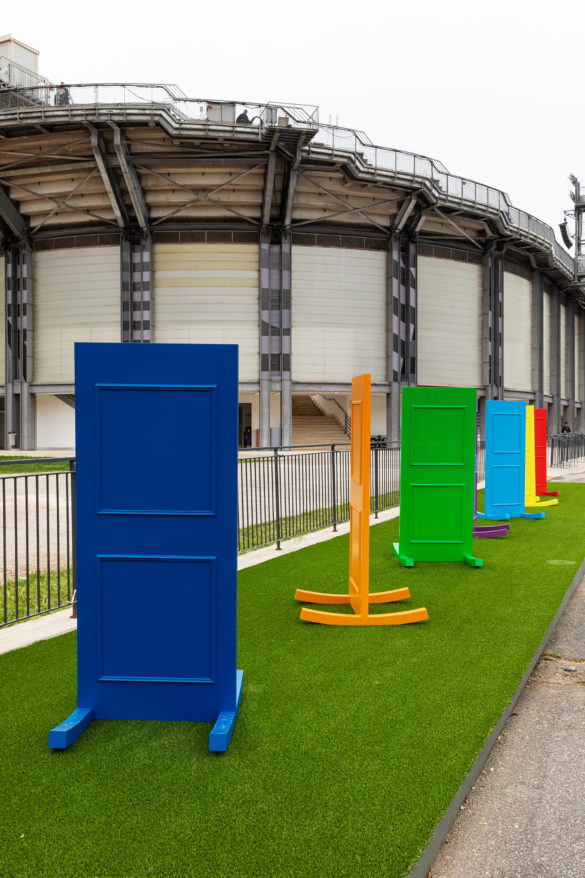 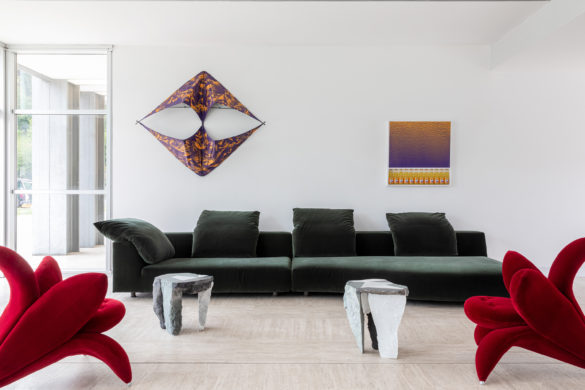 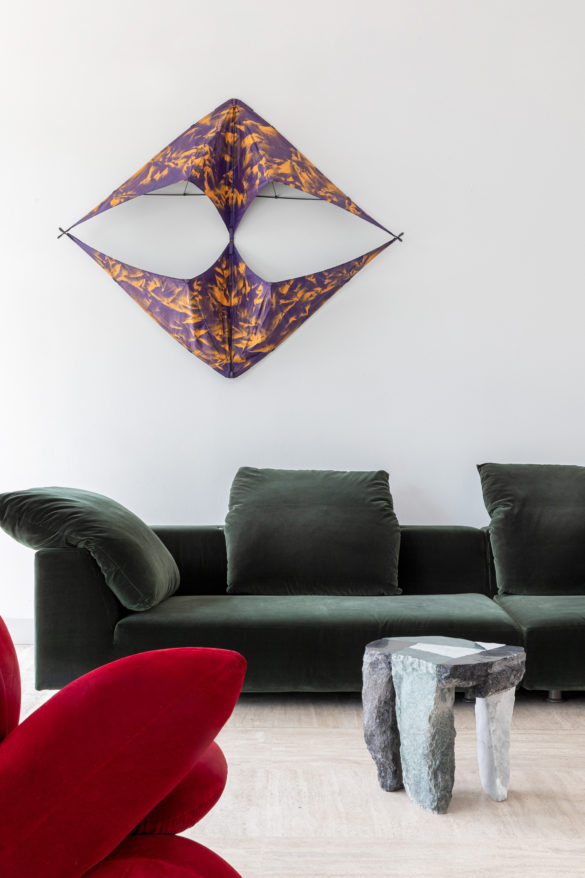 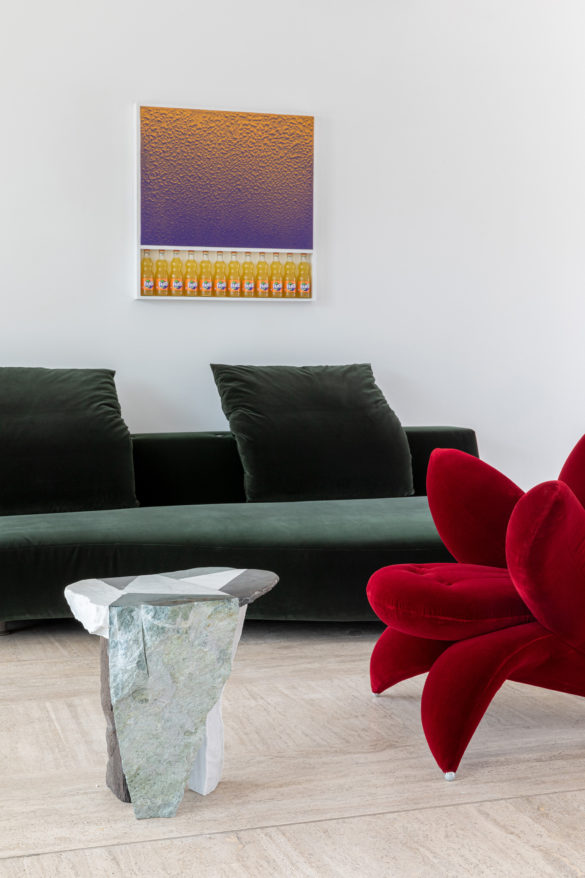 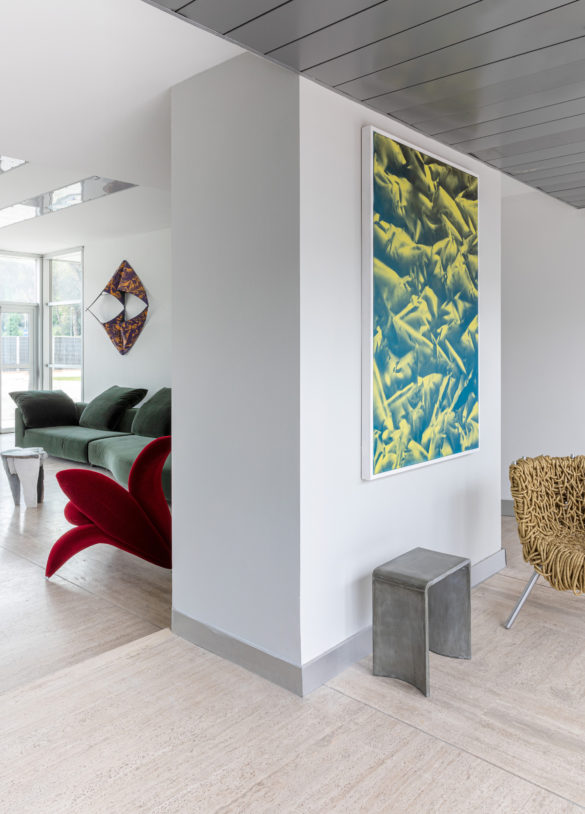 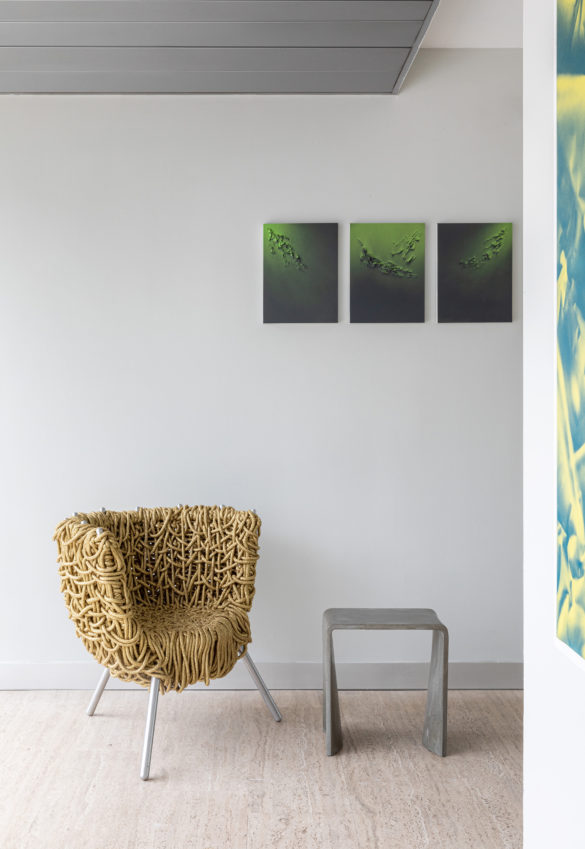 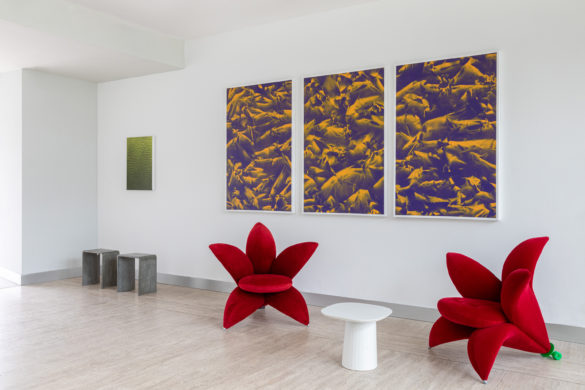 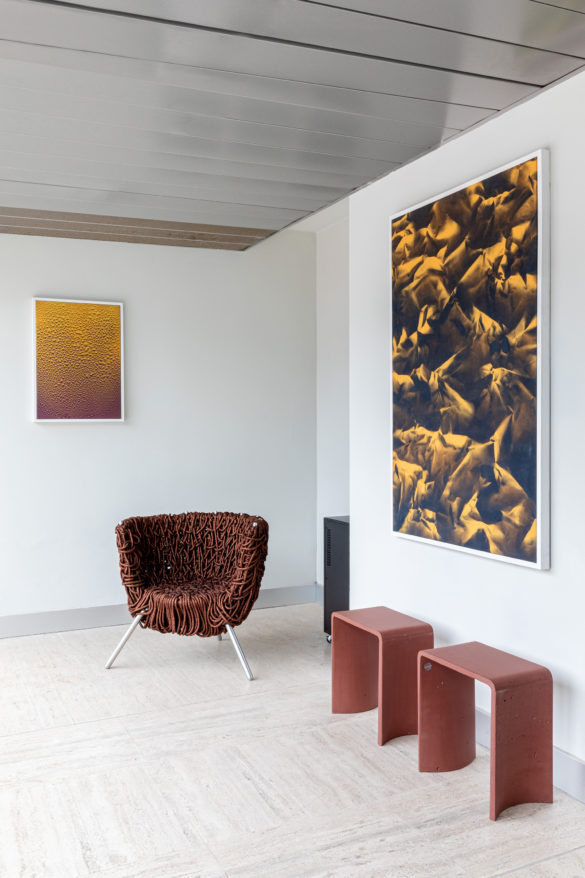 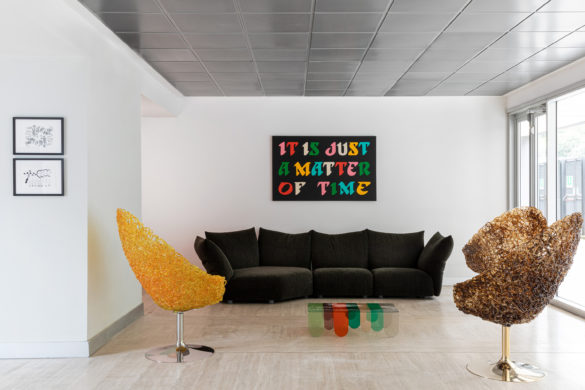 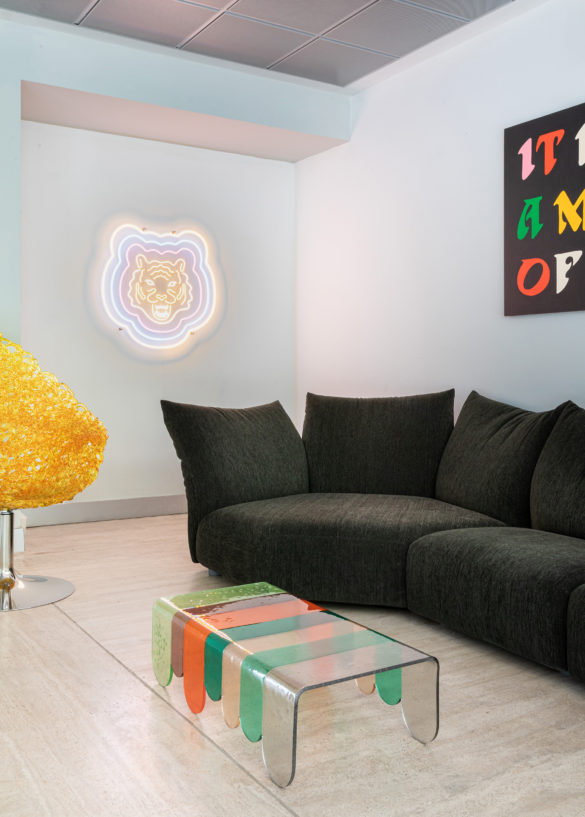 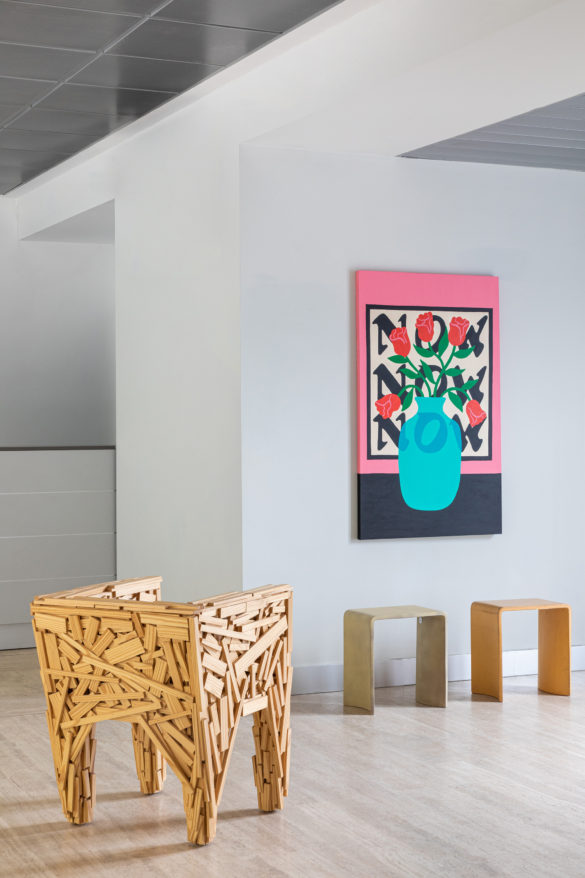 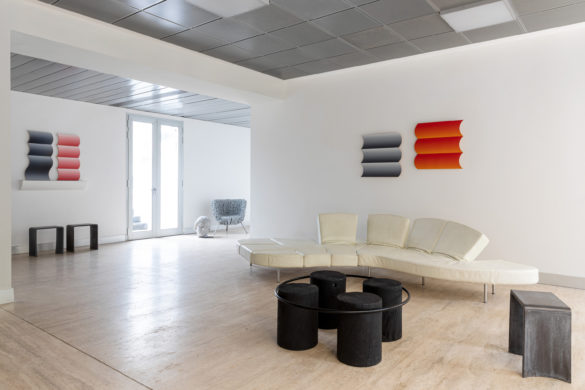 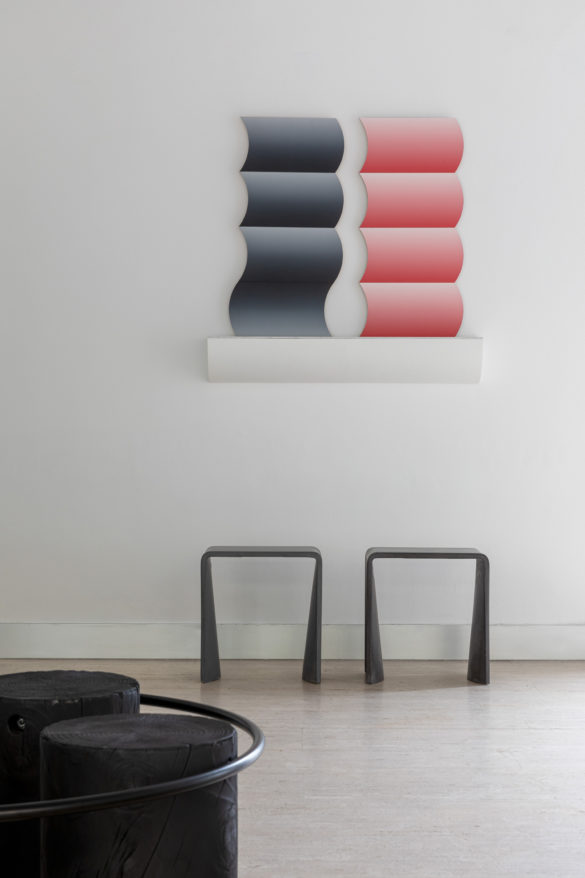 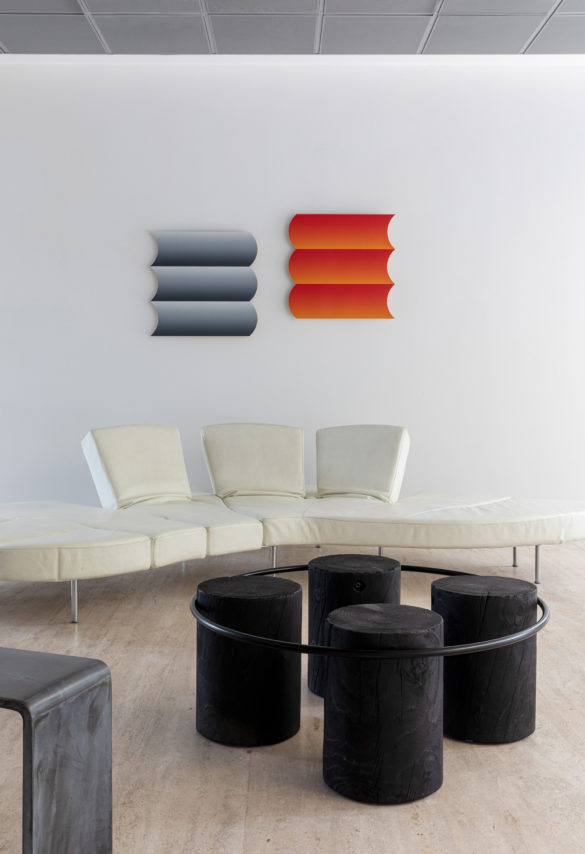 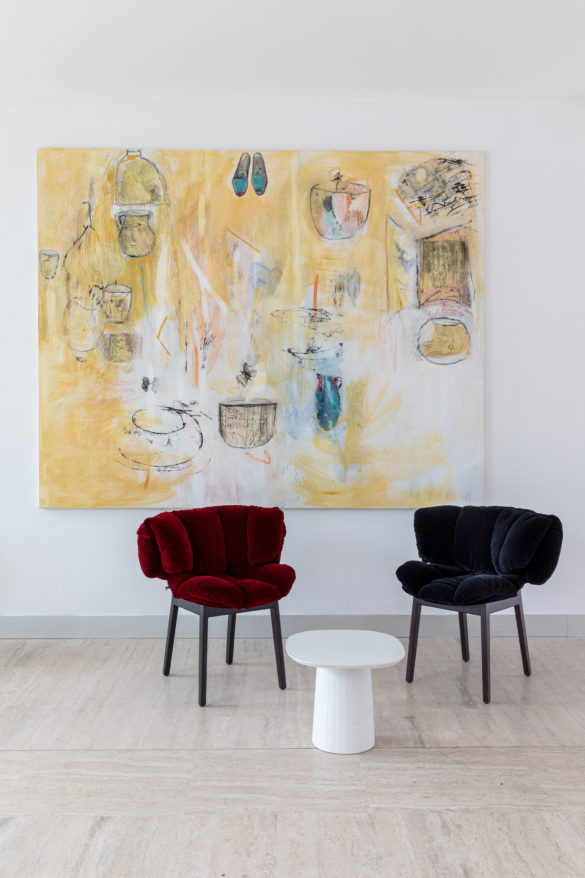 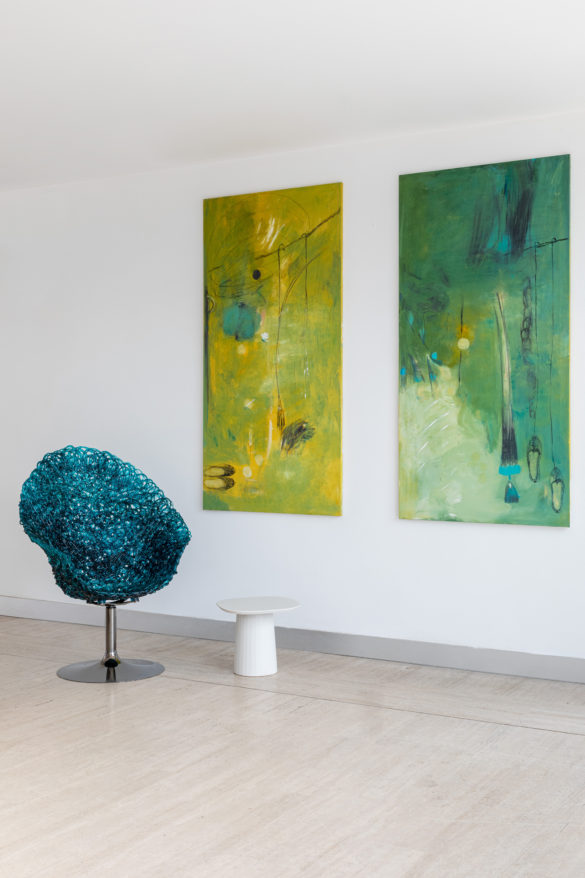 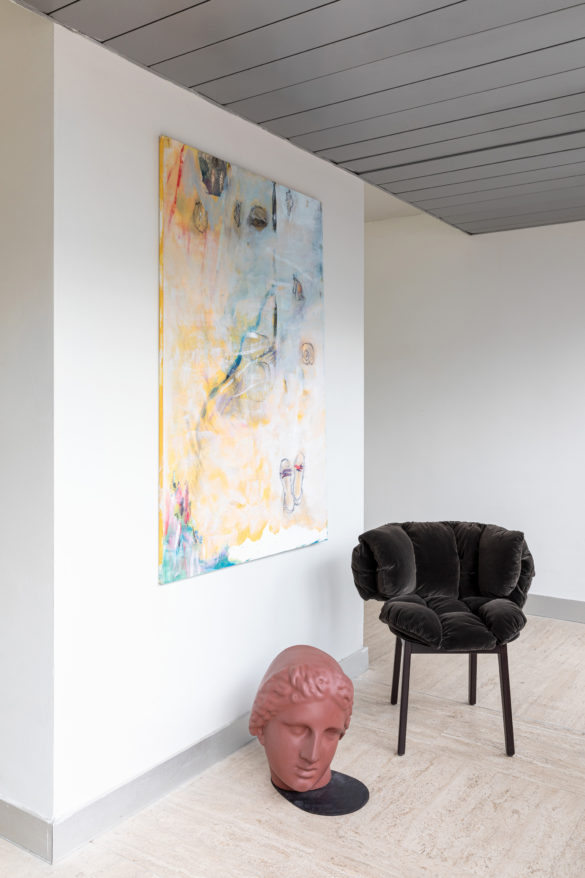 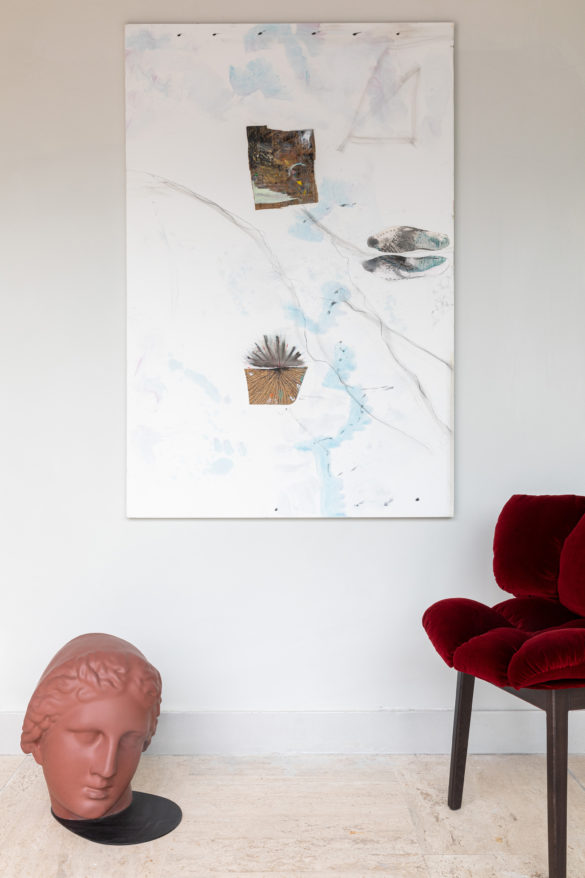 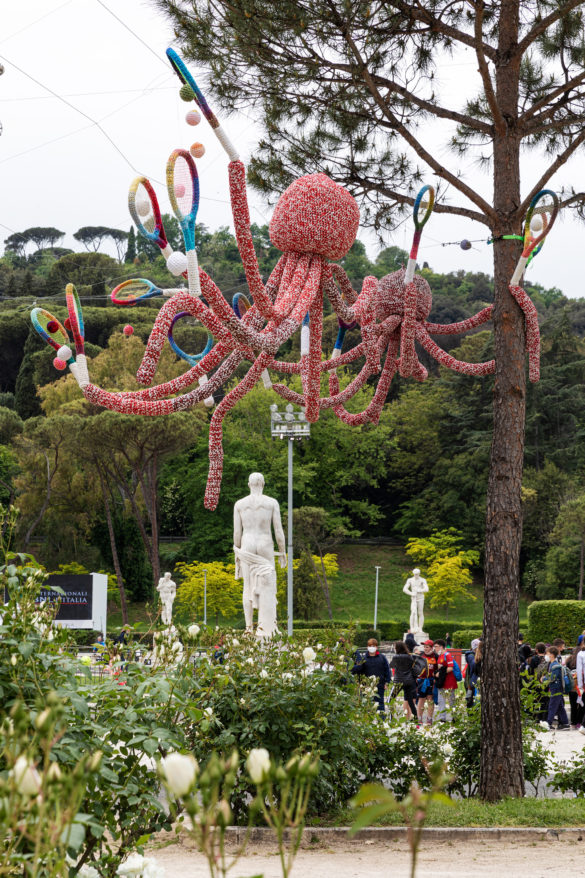 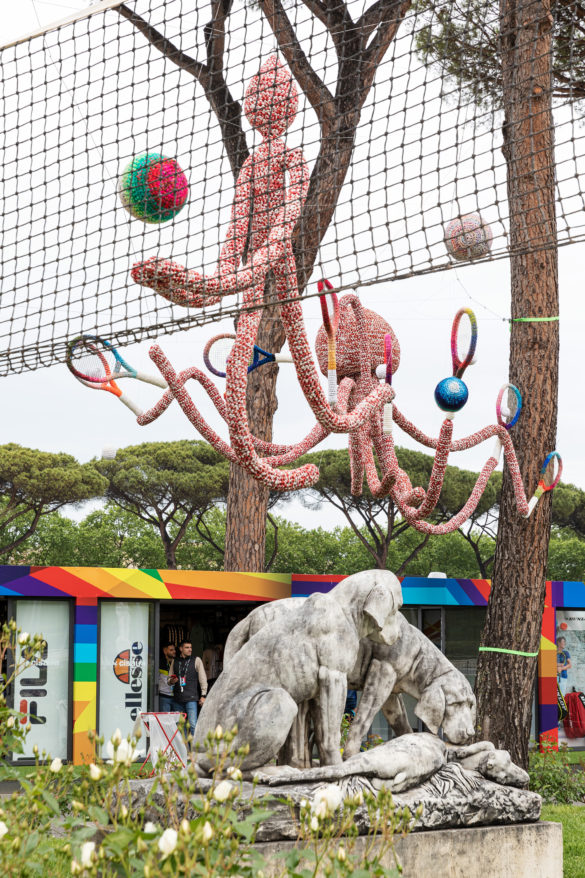 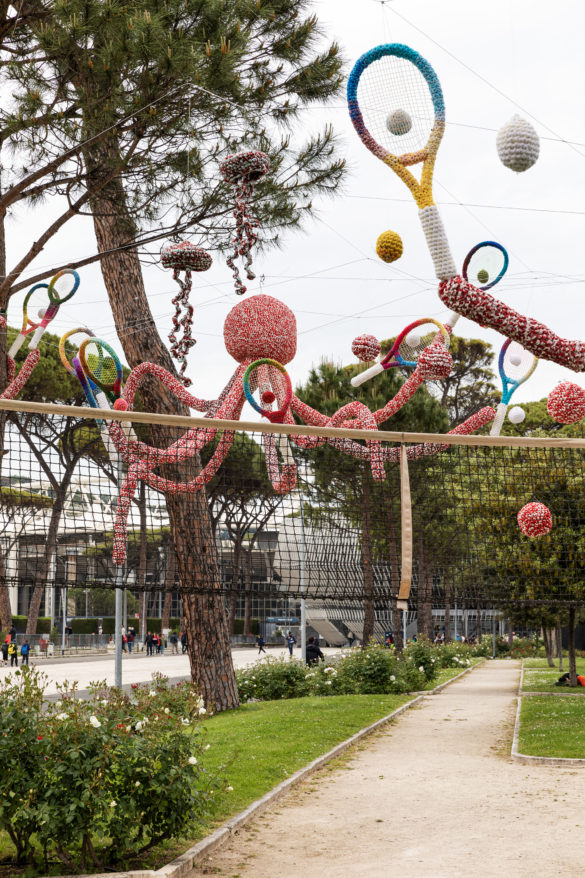