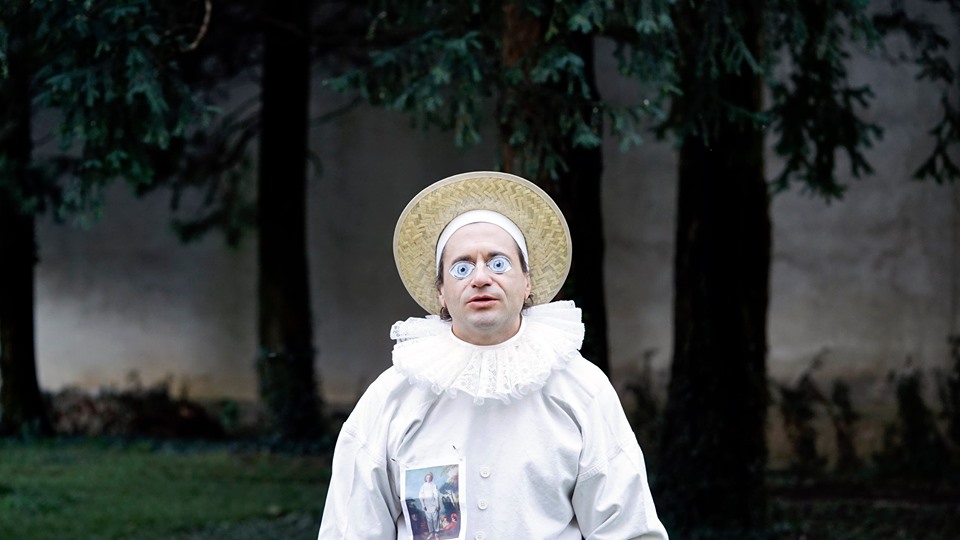 projection of the video of Sergio Breviario titled

“He’s about six feet tall, 45 with a beard. He, like all of us, is looking for someone who can heal him from all evil. On his way he will meet presumed prophets and aspiring saints of the commedia dell’arte, also in search of perpetual happiness.
An extravagant year this and perhaps that extravagance sometimes tends to overflow. This is what we are talking about, slow images, nice, full of an infinite and never voluntary sadness. A video composed of a succession of fixed shots, where some characters perform simple and sometimes unusual actions. More like photographic poses, the images tell the story of a lame man, intent on a visionary path full of crumpled quotations, which seems to end with a very unusual and holy healing: a physical ascent, a levitation.

Sergio Breviario was born in Bergamo in 1974.
In 1998, with the Erasmus Project, he studied at Kingston University in London. In 2002 he took part in the Advanced Course in Visual Arts at the Fondazione Ratti in Como, Visiting Professor Giulio Paolini. His research is based on verifying exhibition systems that are themselves artistic processes. Oscillating between modernist utopia and post-modern consciousness, she stages exhibition mechanisms without absolute certainty, experimenting with a participatory approach.