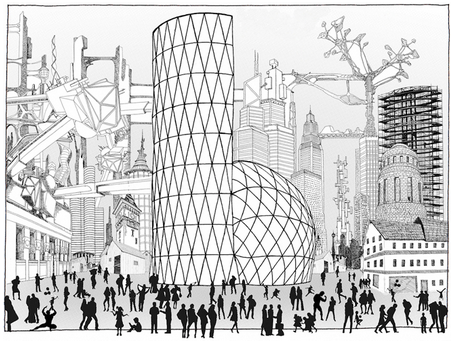 The entire city is accessible to everyone; and people go to where they are drawn.
There is no conflict, because people who have the same opinions always find each other.
Bruno Taut, The City Crown, 1919

studio ASYNCHROME is a multimedial and multi-disciplinary due founded in Graz in 2013 by the architects, designers, photographers and painters Marleen Leitner (1986) and Michael Schitnig (1986). The works of studio ASYNCHROME have been exhibited in various shows and institutions, including: at the Neue Galerie in Graz, the Vienna Biennale, <rotor> – the Centre for Contemporary Art in di Graz, the National Museum of Art, Architecture and Design in Oslo, Design Week in Beijing, the Kunsthaus Graz, the Steirischer Herbst festival, the House of Architecture in Graz, the ART Steiermark in Brussels, the Stadtpark Forum, the Grazmuseum, the OK – Offenes Kulturhaus in Linz and the Architekturzentrum in Vienna, in the Museumsquarter. In 2014, their comic-manifesto Niemandsräume/No mans spaces for TU-Graz press was released with the support of the Institute of Contemporary Art in Graz.