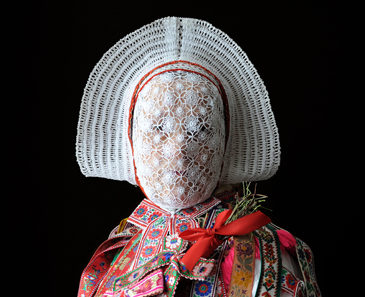 Who am I? And why am I the way I am? In the 21st century, the answer to this question seems to have become increasingly complex. Traditional identities dissolve or are reinterpreted; at the same time, there are completely new possibilities for the development of identities. This raises the question of how far human identity is ‘made’, that is, determined by one’s own decisions and actions, and how much aspects play a role to which one as an individual has no influence. The international group exhibition in the Kallmann Museum explores these questions from an artistic perspective.

Different aspects play a role in the determination of one’s own identity. Beginning with the affirmation of being a person who becomes aware of oneself, of nationality, of one’s own body, of rites and traditions, of language or the ordinary everyday environment. There are countless ways to define affiliations or even temporarily assume another identity, such as in the game. At the same time, features are continuously attributed to express identity and to deal with it. Identity is therefore the result of a continuous process between self-determination and external determination and always variable. This process can never be depicted in its entirety. However, some central aspects are artistically considered in Ismaning and questioned on their identity-creating significance.